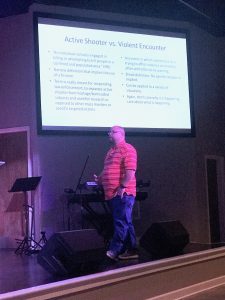 Sgt. David Lawson of the Kendall County Sheriff’s Office goes over key points in his presentation on being in the middle of an active shooter situation at Restore Church in Yorkville on Aug. 27. (Photo by Erika Wurst/for Chronicle Media)

About 50 people — young, old, and every age in between — gathered at Restore Church in Yorkville Aug. 27 with one thing in mind — saving their lives.

Participants sat down for a two-hour training class led by Kendall County Sheriff’s Office Sgt. David Lawson that highlighted actions and mindsets to be utilized during an active shooter situation.

To Lawson, it doesn’t matter why they happen, be it politics, lack of gun control or a myriad of other reasons. What matters is how you’re going to react if you find yourself in the middle of a terrifying situation, he said.

Your brain may not function correctly under the stress. Motor skills will likely be impaired and vision could blur as adrenaline courses through you, but one thing you mustn’t do is freeze, Lawson warned.

“We have seen too many times people freezing in situations because they had so much stimulus coming at them that they couldn’t pick and choose what to do,” Lawson said. “The one thing I want you to not do is nothing…Don’t freeze. If you learn that tonight, I’ll leave a happy man.”

Lawson peppered the participants with tips to ensure their best chances for survival. He used the acronym WIN (What’s Important Now) to help residents stay focused on the task at hand. Whether that’s to run, or hide, or fight back, those who find themselves in an active shooter situation must strive to think clearly, decide a best course of action, and be willing to change that plan as the fluid scenario progresses.

If you find yourself face to face with the shooter, Lawson stressed the importance of fighting back.

“Act as aggressively as possible against the offender. Throw items, use improvised weapons like chairs. Any weapon is better than no weapon,” he said. “Commit to your actions full-on with everything you have. Because it’s you or them.”

And if you get injured, fight just as aggressively to survive. Lawson said that 80 percent of shooting victims will survive, but the mind can be a powerful thing, often leading victims toward death.

“If you sit there and believe you’re going to bleed out, you’ll probably bleed out. If you fight and struggle and go through the pain, you’re more likely to survive. Fight until every last second,” he said.

Students can use book bags as shields, as books are difficult for bullets to penetrate. And everyone should have an escape route and plan in mind for the places they spend the most time at.

“Trust your instincts,” Lawson said, reiterating the WIN mindset. “There is no ‘right answer’, but you must make a decision. You must act and act decisively.”