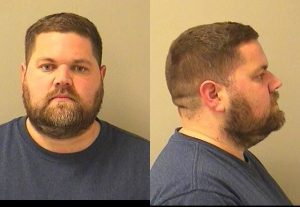 A Montgomery man has been charged with four counts of aggravated battery in connection with a fight at a St. Charles bar.

Brett Willing, 33, a resident of the 3100 block of Fairfield Way, was charged Feb. 21 in connection with the fight.

Kane County prosecutors allege that in the early morning hours of Jan. 19, Willing was at The Filling Station Pub & Grill on the 300 block of West Main Street in St. Charles with friends when an argument started between his group and another group.

Willing punched three people in the head, including one while he was holding a bar glass in his punching hand, according to prosecutors. The glass shattered upon impacting the victim’s head, causing bodily harm.

The victim was taken to the hospital, where doctors removed shards of glass from his head and closed the cuts with stitches.

Willing’s next court appearance in the case is set for 9 a.m. Tuesday, March 10 in Courtroom 311 at the Kane County Judicial Center. Willing remains free on his own recognizance. As a condition of bond, Willing is to have no contact with the victims and is barred from entering The Filling Station.