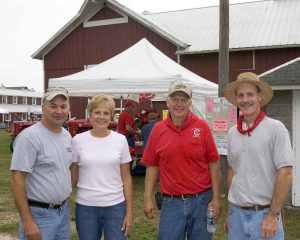 The Conservation Foundation will hold their third annual Beer, Bands and Barns music and craft beer festival on Saturday, July 21 at the Dickson-Murst Farm in Montgomery.

Long-time volunteer for the Dickson-Murst Farm Partners, Ken Wolf, said the proceeds from the event will help them continue to maintain and preserve the farm’s antique barns.

“Proceeds will go to the Dickson-Murst Farm Partners, which is a branch of the Conservation Foundation,” Wolf said. “We’re the ones that take care of all the farm buildings.”

Wolf said there will be two stages set up for the event: one inside the farm’s main barn and one outside. He said the day will kick off with performances by the Foggy Memory Boys, a local bluegrass band, and Natalie Kassab — a singer and recent graduate of Oswego High School.

“Everybody brings their lawn chairs and they listen to music all day long and just have a lot of fun so it’s a great event,” Wolf said.

Other acts include local duo Joe and Rita, Right Street Band and the final act of the evening will be Jason Hubbard. Wolf said that Jason Hubbard will play on the main stage at around 6 p.m. before they open up the stage to open mic performances.

“We’re still looking for open mic people to come and sing,” Wolf said. “That’s the fun part – random people get up on stage and just have a blast.” 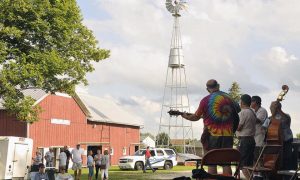 The two food trucks at this year’s event will be Taco Heaven and Country Girl Kitchen. Guests who are interested in partaking in the festival’s craft beer and wine will have to purchase a wristband for $2 and after that each beer ticket is only $1 each.

The festival offers fun for the whole family, Wolf said, and a playground area will be set up or kids with picnic tables for coloring and a “corn box.”

“The parents can put their kids out in the corn box, which is a big box that we got filled with shelled corn, and we got a bunch of toys in there for them to play with,” Wolf said. “That way, the parents can listen to the bands and watch their kids at the same time so it’s just like a little built-in babysitter there on our kids’ playground.”

The Beer, Bands and Barns festival is one of four events that the Conservation Foundation holds at the farmstead each year to fund its continued maintenance.

According to Wolf, the Conservation Foundation bought the farmstead from the village of Montgomery back in 2006 because the organization wanted to preserve it at a time when Kendall County was losing a lot of farms to new development.

The foundation works toward preserving and restoring natural areas and open space, protecting rivers and watersheds, and promoting stewardship of the environment in a four-county area — Kendall, Kane, DuPage and Will.

The foundation now uses the main farmhouse as its satellite office for the county, he said. 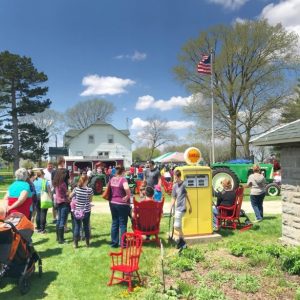 “If we hadn’t have stepped up back then, those farm buildings would have been destroyed,” Wolf said. “It’s (originally) a 150-year-old farm. It’s got a neat old windmill…it’s just your typical farm from back (in the late 1840’s and 1850’s) so we thought it was worth saving.”

Wolf said the Dickson-Murst Farm Partners are a branch of the Conservation Foundation dedicated solely to maintaining the condition of the farm’s buildings to show visitors what a typical Illinois farm looked like back in the 1840’s and 1850’s.

“The farm has been in the Dickson family for generations and Shorty Dickson still lives right across the street there so he helps look after the farm as well,” Wolf said.

The Dickson-Murst Farm Partners are made up entirely of volunteers who meet once a month at the farmstead to discuss future events and renovations to the farm buildings.

To learn more about the farmstead and the Conservation Foundation visit, http://theconservationfoundation.org/.