“Do you know what you’re getting into?”

“Are you ready to deal with ‘these’ kids and what they entail?”

“Are you guys crazy?”

This is just a sampling of the barrage of comments Oswego mom Stacey Limacher and her business partners were peppered with by community members wondering why on earth anyone would want to open an indoor skate park in Oswego.

“People were definitely leery in the beginning,” Limacher said. “Some people were expecting it to bring in problems. You know, all those ‘punk teenagers’. That’s definitely a stereotype thing that we need to overcome and correct.” 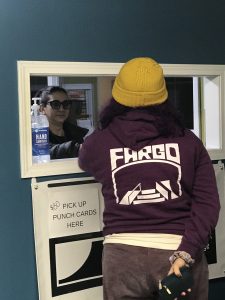 Oswego mom Stacey Limacher works the counter at The Den indoor skate rink she and her business partners recently opened along Route 34 in Oswego. (Photo by Erika Wurst/for Chronicle Media)

In the month since opening The Den, 5462 Route 34, Limacher said she hasn’t had one teen pass through her doors who’s rude or disrespectful. Her team of volunteers goes above and beyond, even staying late to make sure she gets to her car safely after closing up.

“Skateboarding is the only sport I’ve ever seen where you get applauded whether you land a trick or you crash epically,” Limacher said.

On Fridays and Saturdays, the crowd usually ranges in ages from 19-30 years old, but that’s not always the case. It’s not unusual to see entire families come in and skate together, or couples, or father/son teams. Five-year-old children show up for lessons, with proud moms taking photos from the sidelines, and couples cruise the ramps with googly eyes.

It makes Limacher proud to see kids out from behind their screens and at the park pulling off new tricks they thought they’d have to wait until spring to perfect. Instead of the wait, they can forget about the cold, and the snow, and the ice, and head to The Den for an evening away from home and some practice.

The Den’s got more games than you could shake a stick at, but a simple table, a long, tall table with chairs and standing room to congregate around, has proven to be the teens’ gathering place of choice.

“They’re just over there having snacks, cracking up, talking to each other and making new friends,” Limbacher said, which is exactly what she sees happening with her 14 -year-old son as a result of the time he’s spent at The Den over the last month.

“This has been incredible for him,” Limacher said. “The friendships, and the exposure to the older guys who have really taken him under their wing — it’s amazing. Sometimes I’ll go (into the skate park and see him) and get all teary-eyed and think, ‘Look, it’s working.’ ”

She said what her son didn’t find in other sports, he has found in skating. Seeing this in person gives her hope that The Den will ignite others with confidence and to find a sport of their own to embrace.

So far, it seems as if her efforts are being appreciated. Time after time Limacher is pulled aside by a young adult just to be told how much The Den means to the community. They’ll talk about how it’s a place they’ve been needing, and one they’ve been waiting for. 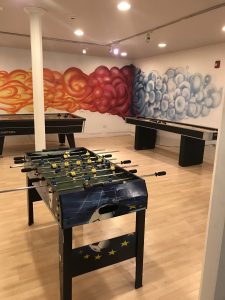 In addition to skateboarding, teens can hang out and play foosball and other tabletop games at The Den, 5462 Route 34, in Oswego. The place also offers snacks and a video game area. (Photo by Erika Wurst/for Chronicle Media)

That is why Limacher and her Board of Directors  — Jeff Limacher, Wendy Greenslade, Karen Kulzer, Aaron Kramer and Will Zaragoza — kicked it into high gear to make sure The Den was open for winter break. It was a mission that they made sure kids had a place to go, and one the group was adamant on following through with.

What, on paper, should have taken more than a year to accomplish was completed in a matter of months due to the efforts of all the families and their children working together.

There’s still a crock pot in the office for nights when they’re stuck working late.

“We worked so hard to do this,” Limacher said. “I don’t think we stopped long enough to even think if it was going to work. We wanted it so badly that we moved ahead on adrenaline and excitement … So, when someone stops us and tells us we’re appreciated I can’t even find the right words.”

But, the board believes there’s still plenty to be done. If The Den is drawing in teens and young adults, why not find other ways to better their lives while they’re there? Why not make use of the fact that they’re already here connecting, Limacher wondered.

Since The Den is registered as a 501 C3, the group will be able to partner with other local community groups and receive grants for educational programs. She hopes to bring in partners to speak about suicide, anxiety/depression, dating violence, First Aid and CPR training, and well as community groups seeking volunteers.

Birthday parties, concerts, skate contests, movie nights, dodgeball tournaments and other events are all on The Den’s roster as well.

“I wake up every morning and my brain just doesn’t stop,” Limacher said. “We need to get these kids involved in events, activities and programs. This just leads to a deeper connection and is a healthier approach to their development at that age.”

So, whether they want to develop their personal skills, their skate skills, their ping pong skills, or just chow down on a Hot Pocket (on sale for $2), The Den is a place where you will find teens every night, tackling new tricks and shredding old stereotypes.