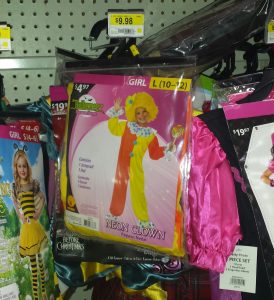 A little girl’s clown costume still sits on the shelf at Walmart in Montgomery. Several local parents have made the decision not to allow their children to dress as clowns this Halloween in the wake of creepy clown sightings that have occurred across the nation. (Photo by Erika Wurst / for Chronicle Media)

Halloween is almost upon us, and in addition to checking sex offender registrations, mapping out trick-or-treat routes and finding that brightly colored or reflective gear to wear, local law enforcement agencies are reminding residents of one more thing this year: Leave the clown costumes at home.

“The clown masks, I’d probably not recommend wearing them,” Oswego Police Chief Jeffery Burgner said. Burgner and his jurisdiction were hit with a creepy clown hoax in early October, putting residents on high alert along with the rest of the country.

“It’s still a pretty fresh situation,” Burgner said. “It’s been a few days since we’ve dealt with (clown sightings), but dressing as a clown this year is still something I wouldn’t recommend.”

As it does on every Halloween, the department will have extra officers on the streets. They’ll be on foot and on bike and in car, and, if you are dressed as a clown, you’ll probably get the officers’ attention.

“The mere fact that someone is wearing a clown costume in itself is not illegal, but at this point in time, based on what’s been going on the last few weeks, it’s going to get our attention. If someone does make the decision to wear (a clown mask) they need to act appropriately,” Burgner said.

Tricksters who do “alarm or disturb” trick-or-treaters could face disorderly conduct charges, or worse, he said.

Kane County Sheriff Department Lt. Patrick Gengler echoed a similar sentiment in regards to the clowning-around. He said people should really think twice this year about whatever costumes they don.

“Parents are very protective of their kids,” Gengler said. “I’m fairly certain there’s quite a few people who will do what they have to do to protect their kids. These (tricksters) might think they’re being funny, but they could end up on the other end of something they want nothing to do with, like an angry parent.”

Oswego mother of three Eva Cross is heeding this warning.

“I think it’s all just a hoax, but worry that kids could get hurt dressing as clowns this Halloween and won’t allow my boys to do so for that reason,” she said. 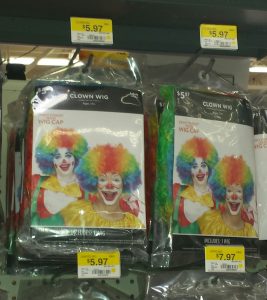 While wearing a clown costume on Halloween, even a benign one, is not illegal, police are advising this year to stay away from dressing up like a clown or risk getting their attention. (Photo by Erika Wurst / for Chronicle Media)

Cross said she will head out with her children as a family and have her eyes peeled for anything suspicious this year.

Gengler and Kendall County Sheriff’s Department Deputy Mike Mrozek both recommended calling law enforcement officers if something seems amiss on Halloween night, rather than confront a creepy clown or character themselves.

Although Mrozek said they’ve received no clown sighting reports in unincorporated Kendall County, he is encouraging residents to speak up.

“If someone sees something suspicious, don’t hesitate to give us a call,” he said. “We don’t get upset when people call us to look into something.”

Aurora police are recommending children only head out to Trick-or-Treat during the daylight hours. Trick-or-treat hours in Aurora are from 4-7:30 p.m. this year. They’ve offered tips on how to have a safe holiday, including carrying cell phones, avoiding houses without lights on and staying on sidewalks.

Aurora mother Christene Shank, already frustrated with the whole creepy clown fiasco as of late, has decided to skip trick-or-treating all together this year.

Shank’s daughter, who is about to turn 12, usually heads out to trick-or-treat with her friends and cousins who are between 9 and 13-years-old.

“Due to the last couple years of bad weather, the violence, and now with the scare of these clowns, we have decided to have a small gathering or a pizza party instead,” Shank said. “This will give the parents security knowing who we are around and hopefully it will be a safe and enjoyable night.”

Shank said her daughter has been “extremely understanding” in her parents’ decision to stay in this year.

— Police are clear — no clowning around this Halloween —