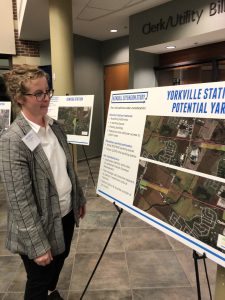 Jeff Houghton of Oswego was one of more than 70 area residents who attended an open house at the Oswego Village Hall Dec. 3 regarding the potential extension of Metra BNSF commuter rail service into Kendall County.

A Metra rider for 29 years, Houghton now drives to the Aurora train station — a trip that adds about 20 minutes to his commute downtown which is just over an hour in total.

Interested in learning about the “political and mechanics” of the project, Houghton said, “it is pretty impressive,” but he is concerned about the “funding” and the timeline for the project’s completion — something that in the reality of public service projects may coincide with his retirement years down the road.

Just moving to Oswego in May from Naperville, Mallory and Adam Hague said they are both very familiar with the convenience of having a nearby train station.

“We had family come to visit and they wanted to get downtown,” said Mallory Hague. “We had to tell them it was going to be a trek.”

“It would be nice to have the option here,” she added.

The cost for the project would be between $400 and $500 million and an additional $5 million needed annually for operations and maintenance.

The previous evening, Metra representatives met with about 50 residents of Plano to hear their feedback and discuss the project.

It is estimated that an express train from Oswego or another outlying location could reach downtown in just about an hour, according to Michael Gillis, a spokesperson for Metra.

The study is looking into whether two, four, or six round- trip trains would travel between Kendall County and downtown Chicago.

“There are two components of the analysis, an environmental component and an engineering component,” he added.  “The goal is to have analysis next summer that we can give to the backers of this extension to guide their decision-making.”

The study is being overseen by Metra using federal funding earmarked by Kendall County stakeholders that was first acquired back when Dennis Hastert was in Congress, Gillis said.

Two station options in Plano and four in Yorkville are under consideration, while in Montgomery, Oswego, and Sandwich only one location has been identified.

At a minimum, each station would have an inbound and outbound boarding platform, a warming house, parking facilities, and pedestrian and vehicular access to public roads.

“We are trying to get more clarity on where we can put the stations and where the [train] yards would be located,” Gillis said. 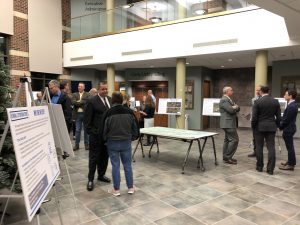 Attendees talk over the plans presented by the Kendall County Extension Study during a Metra open house held at Oswego Village Hall on Dec. 2. Kendall County residents currently use either Aurora station or can drive to Naperville to use Metra train service.(Photo by Cathy Janek/for Chronicle Media)

According to the report, one additional track from Aurora would be created and the existing siding track would be expanded to create a second continuous track toward Sugar Grove.

Tim Selover, an environmental consultant for the project, said his team has completed a “high-level analysis of environment including any threats to wildlife or wetlands” and so far, only one threat to an endangered species of bat has been identified.

In the spring 2020, another open house will be held to give an update on the study and announce the preferred station locations.

Residents can provide feedback until Jan. 6, 2020.  The survey and more information about the project can be found at Kendall Extension Study website.