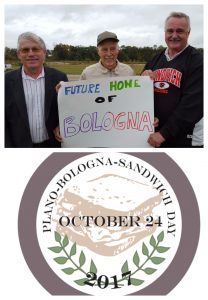 A long-standing community joke will become a reality later this month as the towns of Plano and Sandwich come together to celebrate National Bologna Day in the most epic of ways.

Mayors Rick Olson of Sandwich and Bob Hausler of Plano, have announced the first annual “Plano Bologna Sandwich Day” celebration which will take place on Oct. 24 in a small, empty lot sandwiched between the two towns. The area will be named the Town of Bologna, and those who attend the event will become residents for the day.

“Sometime you’ve got to take advantage of a community name,” Olson said of the event. “For me this is an opportunity and I think it’s something fun.”

Olson said companies like Dairy Queen, Campbell’s Soup and Kentucky Fried Chicken have all approached the city of Sandwich in the past in attempts to market their products.

A Campbell’s Soup sign once covered the town’s water tower as a marketing stunt, and skydivers dressed as the KFC Colonel once flew into Sandwich to announce a new product.

This month, the mayors of Plano and Sandwich are coming together to market their names in the name of charity.

The celebration, which will include the band The Bologna Brothers, will also be marketed as a food drive to collect non-perishable food items for local food pantries.

Visitors who bring items to donate will be rewarded with a fried bologna sandwich, courtesy of The Wurst Kitchen.

“There’s so much negativity in this world right now, we wanted to take something like this and have fun with it,” Olson said.

The Indian Valley Vocational Center is having a contest to create the Town of Bologna logo, which will be printed on T-shirts for sale. The fictional town’s mayors have also been chosen.

Ed Schleining of the Wurst Kitchen in Plano, and Karl Rud, a retired butcher from Sandwich, were announced as Bologna’s leaders last week.

“The event is evolving and I’m sure there will be a lot more going on than we know right now,” Olson said. “We want to see if it catches momentum and maybe make this a yearly event. I think it’s going to be a really good time.”