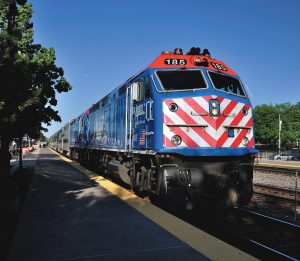 According to a Metra 2016 analysis of major capital projects, the preliminary estimate showed the Kendall County extension could attract as many as 2,000 extra weekday riders.

When the state of Illinois passed the first capital bill in 10 years, it included $100 million to support something the towns of Montgomery, Oswego, Yorkville, Plano and Sandwich have been long been pushing for — a Metra service extension.

The money would help fund the cost of adding a third track, upgrading signals and building some kind of rail yard to store train overnight. But that, in itself, won’t get the project off the ground. The state funding covers only about one-fourth of the construction costs, and the five municipalities plan to use a combination of federal grants and local funding to cover the rest. Even if they do raise the money, it is not entirely clear whether it would be enough to extend the line as far west as Sandwich.

And there is still the matter of keeping the service running once the extension is built. Kendall County and the neighboring DeKalb and LaSalle counties aren’t part of the Regional Transportation Authority’s service area. While Metra can use RTA funds to expand service to Montgomery, it can’t go farther west until Kendall County joins RTA. Alternatively, Metra is open to the four towns covering the costs that would normally come through RTA some other way.

BNSF Railway owns the tracks that run between Chicago and the five towns. It operates the BNSF Line between Chicago and Aurora on Metra’s behalf. Past that, four Amtrak routes continue west, but only two — Illinois Zephyr and Carl Sandburg — stop at Plano. Together, those trains make one morning and one evening trip in each direction. But the morning inbound train doesn’t arrive in Chicago until 10:30 a.m., which makes it impractical for workplace commuting.

It should be noted that the capital bill also allocated funding to finish the improvements necessary to launch the new route to the Quad Cities region. The route would use the existing BNSF tracks as far as Princeton and take Iowa Interstate Railroad tracks the rest of the way. While the exact schedule hasn’t been settled on, previous studies suggested two trains in each direction, which would effectively double Plano service.

As previously reported by the Chronicle, some residents already drive to Aurora to commute to Chicago. As of 2016 — the most recent numbers available at press time — 522 daily passengers came from Oswego on an average weekday, while 137 came from Yorkville, 40 came from Plano and 169 passengers came from the Kendall County portion of Montgomery.

According to Metra’s 2016 system-wide cost-benefit analysis of major capital projects gave the preliminary estimate that the extension could attract as many as 2,000 extra weekday riders.

The villages of Montgomery and Oswego have been pushing for the extension since the early 2000s. Around 2004, Oswego purchased five acres south of the BNSF tracks, east of Orchard Road, to build a parking lot that would be ready for commuter use once the station is built. In 2016, it purchased additional 15 acres to build an additional parking lot. Oswego Village Administrator Daniel Di Santo previously told the Chronicle that Oswego hopes to put the station on the south side of the tracks.

In November 2018, Oswego and Yorkville hired Chicago-based the Fletcher, O’Brien, Kasper & Nottage lobbying firm to push the state to include funding for the construction of the extension in the capital bill. As Metra spokesman Michael Gillis explained to the Chronicle, his agency previously told the municipalities that they would have to cover the construction costs. He added that Metra’s 2016 preliminary cost estimates of major capital projects put the construction costs of the extension at $439 million. Di Santo said that the municipalities plan to apply for federal grants to cover $200 million and use the local sources to cover the rest.

Gillis also noted that Metra’s priorities are to maintain the system that already exists. While the agency had an extensive wish list of projects it hoped the state would fund, the BNSF line extension and other proposed extensions weren’t on it.

On Aug. 16, 2018 Metra went out to bid for an engineering study of the extension, but it wasn’t until May 15, 2019 that the Metra Board of Directors actually awarded the contract to Chicago-based Alfred Benesch & Company.

The study will be looking at how much it would cost to build the platforms and stations, improve signals, build a third track to improve capacity and store trains overnight. Adding the third track would be necessary to accommodate the increased commuter train traffic. And the train storage would depend on just how far the line goes.

If the extension doesn’t go past Oswego, Metra would also need to either expand its existing 14th Street train yard in Chicago or build a “small reliever yard with three tracks” west of Aurora to store the trains during the day. If the extension goes farther west, a new, larger train yard would need to be built at whichever city the line ends.

The study is expected to take around 12 months. Di Santo said that, once the study is done, they expect it would take the municipalities about two years to secure the federal funding.

The exact endpoint is still an open question. Di Santo said that, ideally, they would want to extend the line all the way to Sandwich. If the Metra study finds that it would take more than $400 million, they will have to adjust the endpoint accordingly.

Gillis said that, as of 2016, Metra estimated that it would cost $5.1 million per year to operate and maintain the service. The engineering study, he said, would give it “a more detailed estimate.” But whatever the number may be, the cost would have to be covered. And while Montgomery plans to build the station in the Kane County portion of the village, the rest of the line wouldn’t qualify for RTA funding.

When asked whether the five municipalities figure out how to address the long-term cost issue, Di Santo said that, as they see it, “it makes no sense” to tackle that question until they know they have the money to build the extension in the first place.

“The most important thing right now is to identify and secure the capital funding,” he said. “[Figuring out the long-term funding] would be the last step in the process.”

Di Santo explained that the municipalities had several conversations with the RTA, and they would be open to either having Kendall County join the RTA or working out a “service agreement” with the municipalities that would fund the service some other way.