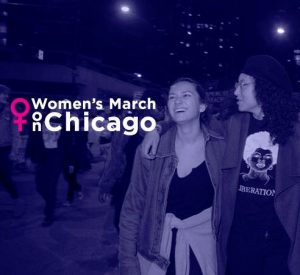 Women from the western suburbs say they have a duty to participate in the Women’s Marches being held in Washington D. C., Chicago and other cities Jan. 21. (Image courtesy of Women’s March)

On Jan. 21, women from all walks of life will wake up ready to march.

They will come together in cities across the country with a united purpose:

“We will not rest until women have parity and equity at all levels of leadership in society,” said Cassady Fendlay, head of communications for the Women’s March on Washington. “We work peacefully while recognizing there is no true peace without justice and equity for all.”

For Lauren Guydan and her daughter Jane, the mission is one they say they can get on board with.

Guydan, who recently moved to Chicago from Naperville, will join her daughter in D.C. this week to protest inequality and promote peace.

“I’m a new activist,” the 52-year-old mother said. “I was very disappointed with the outcome of this election and felt now is the time. It’s one thing to complain how things are going. But, I’ve always believed ‘put up or shut up’. I don’t want women’s rights to backslide. I know my life and my daughter’s life is partly made possible by the women who came before us, and now it’s our turn.”

The retired School District 204 employee said that now that her life has slowed and her children are grown, she wants to dedicate more time to helping others.

“I can’t just sit back and let hard fought rights and changes be put aside,” she said. “I feel like I have a moral duty to fight for my beliefs.”

So, Guydan and her daughter Jane, 23, will join hundreds of thousands of women in Washington where they will march for women’s rights. 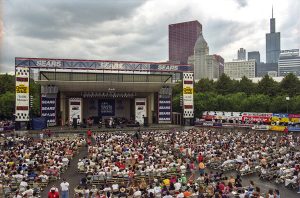 The Petrillo Bandshell in Chicago is known for hosting concerts and music festivals but on Jan. 21 it will be the location for people gathering for the national Women’s March on Jan. 21. (Photo courtesy of city of Chicago)

She said she’s excited to see “seas of people” united for the same cause.

“I grew up learning about the civil rights movement and women’s lib,” Guydan said. “Most of that was over by the time I was old enough to be aware of it. Someday, people will talk about what we did (in Washington), and that’s something I can’t miss.”

Others, like Oswego mother Alyssa Thomas, have also felt the call to action.

Although she can’t make it to Washington on Jan. 21, Thomas will join friends and family in Chicago where a sister march is scheduled.

The Women’s March on Chicago will start at Petrillo Bandshell in Chicago’s Grant Park at 10 a.m.

“I’m marching for my children,” Thomas said. “Right now (my twin girls) don’t have any idea that they will have a different experience or different opportunities than any boy will. They don’t think there’s a difference between what girls and boys are capable of. We need to do something now so they don’t have to deal with any kind of gender inequality.”

Marching also means thinking about and considering the rights and feelings of those outside her family, said Thomas. It means popping her own “bubble” and standing up for strangers.

“I think if I can do something, I’ll do it,” Thomas said. “I vote. I donate money when I can. I volunteer when I can. So, when women from across the country peacefully come together to promote inequality, the very least I can do is show up.”

For Thomas, the march is less about the results of the presidential election and more about ever-present issues facing women across the world. The issues are bi-partisan, she said.

“Women are 50 percent of the population, but we’re not treated like we’re equal and that’s a problem. We can’t say we value freedom and democracy over everything else if we don’t treat everybody the same way,” Thomas said. “Some people are marching because of the election, but the bigger picture are issues of inequality. It’s not just this administration’s problem. It’s all administrations’ problem.”

For details about the Women’s March on Chicago, visit womens121marchonchicago.org.