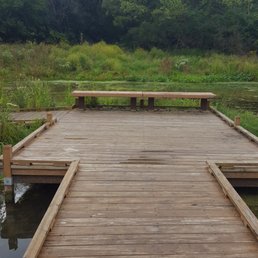 Two teenage girls were rescued after entering the Fox River on rafts at Lippold Park in Batavia on Wednesday, July 26. The river is still at high levels following recent heavy rains.

Two teenage girls were rescued from the Fox River on the evening of Wednesday, July 26 after their inflatable raft overturned in the water.

According to Jeff Long, Communications Manager for the Fox Valley Park District, park district police received a call for help concerning two girls clinging to a tree in the river near Lippold Park, 2001 S. River St., Batavia.  Neither girl was wearing a life jacket, Long said.

The girls were taken by ambulance to North Aurora Village Hall where they refused medical treatment. Officers transported the teens back to their car at Lippold Park.

Long said the victims were part of a group that included five other teenagers who remained on land and were able to make calls to emergency personnel as the victims became stranded in the river.

“It was determined the victims entered the Fox River in an inflatable raft at a fishing access station located in Lippold Park and attempted to paddle north – against the current – toward Glenwood Forest Preserve when the raft overturned,” Long explained. The river has been closed for recreation since July 14, due to flooding and record high water levels.

The Fox River is still above flood level, measuring 13.5 feet at the USGS gauge in Montgomery. Flood stage at that location is 13 feet.