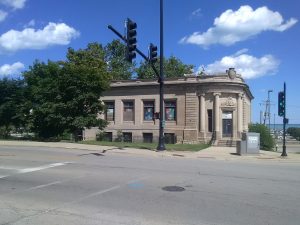 Note: The Waukegan Park District has embarked on two projects involving extant historic and landmark sites, long neglected, within the municipality. This is Part 1 of a two-part article highlighting those efforts.

With little fanfare, the Waukegan City Council passed a motion to sell the historic Carnegie Library building for $1 to the Waukegan Park District, during its Dec. 16 session.

The building, erected in 1903 and shuttered in 1965, is being eyed as a permanent site for the Waukegan Historical Society and its archived collections. The gravitas driving the current action is an evaluation made by the Carnegie Preservation Project for upgrades and necessary repairs.

The Waukegan Public Library moved to its current 128 N. County location in 1965, citing the need for a larger facility to accommodate its holdings and offer meeting spaces. The abandoned Carnegie Library building has been the subject of attempted purchase and concept uses including a servicemen’s club, an upscale coffee shop, or simply, “an artifact for preservation” in the 50-plus years since its closure.

“This is a great opportunity to help give a new life to Waukegan’s Carnegie Building,” said Waukegan Mayor Sam Cunningham. “I am looking forward to seeing this iconic Waukegan landmark again serve as a primary destination in our downtown, and I applaud our partners at the Waukegan Park District for their vision. This is another great example of working together to improve the cultural landscape of our community and generate additional tourism.”

Built with grant monies from the Andrew Carnegie Foundation, it was part of a “nationwide gift” from the steel magnate in applying his “surplus wealth” dictum in providing places and resources of culture for the masses, along with serving as a tacit gateway to education. The Waukegan version stands at the northeast corner of Washington Street and Sheridan Road, on a bluff, with its broken windows visible from the Amstutz Bypass Drive below.

The building is also forever tied to Waukegan-born writer, Ray Bradbury. Born in 1920, Bradbury recalled frequenting the building, from age 9 through his teens, and “the intoxication” of the smell and feel of the books before he had even read them.

Waukegan became a backdrop in several of his stories, most prominently as “Greeentown,” in “Dandelion Wine.” The book’s locations and plot developments sprang from memories of his family’s house, behind that of his grandparents on St. James Street, and the routes to the downtown such as the famous Madison Street cut leading from the Waukegan River Ravine.

In 2015, a nonprofit organization called the Greater Waukegan Development Coalition joined with other business-minded stakeholders with a $10 million effort to re-open the building as The Bradbury Carnegie Center.

The Waukegan River Ravine leading up toward Madison Street, as an access route to the downtown. (Photo by Gregory Harutunian/for Chronicle Media)

However, he was honored Aug. 22 with a sculpture on the new library’s plaza that coincided with what would have marked his 99th birthday celebration. The piece, “Fantastical Traveler,” is a 12-foot stainless steel statuary showing Bradbury riding a rocket with an outstretched arm holding a book, and its pages appearing to flap in the wind.

Selina Gomez-Beloz, the library’s Executive Director, had said response to the statue has been positive while patrons and residents also remember the Carnegie Library. She noted that it gives her the opportunity to hear stories from the community “about their parents, grandparents, and others that grew up with it.”

For the present, the park district is expected to conduct design studies in the early spring to arrive at closer financial figures for the building’s restoration. The historical society is currently based at the William Haines House at Bowen Park, and had previously researched expansion costs at their site. One consideration for the library building is to include fireproof and waterproof storage vaults for artifacts and holdings.

“The park district is working with the historical society not only to preserve and document these types of sites but to create a solid working partnership,” said Tim Girmscheid, the district’s Manager of Planning Services. “It’s more of an opportunistic perspective (with the sites) because all the parts are there, and creating the working partnerships to help bring it together.”