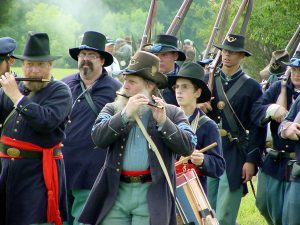 The 27th annual edition of the Civil War Days, which were slated to take place July 13-14, has been canceled for a second time, due to security concerns, and will not take place this year.

The halt to the flagship event of the Lake County Forest Preserve District was announced June 24 by its board president Angelo Kyle, who had earlier attempted a cancelation in mid-June. That effort was met with dissension from board members and park commissioners alike, and rescinded.

The most recent cancellation was based on security concerns, although no “credible threat” was named. Kyle had previously denounced the event with its overtones of racism, during the June 11 board meeting, saying that history is written by the victors, and he believes there is only one side to the story being told at re-enactment events.

“Our ancestors told us what really happened,” he said. “Did you know that black soldiers were put on the front line in the North and Southern front lines so they would be killed first?”

Local activist Ralph Peterson Jr., who has cited forms of racism in the past, entered a social media post stating the cancelation was “the best decision because many found the re-enactment to be culturally insensitive/not truthful as to what it is really all about and how the slaves were treated before, during, and after the war.” 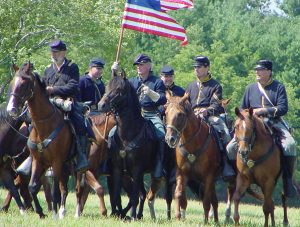 In addressing the security concerns, the district issued a statement June 25. “We would like to respond to the numerous requests for details regarding our safety concerns that resulted in the cancellation of the 2019 Civil War Days. The safety concerns were specific only to this year’s event. These included inflammatory remarks made during phone conversations with staff, on social media platforms, and in articles and posts related to the event.

Additionally, several organized groups with opposing viewpoints expressed plans to use the event as a platform. The potential for a tense situation that could become uncontrollable at a public educational event caused legitimate concerns with key event and public safety staff within the district.

Our staff discussed these concerns in relation to logistics of this complex event, which includes large crowds, live animals, and Civil War-era weaponry all spread across many acres. When we invite the public to our preserves…We will take no chances with public safety.”

When contacted later, Katherine Hamilton-Smith, the forest preserve’s director of Public Affairs and Development, said, “Our educators work very hard and very professionally to present and encompass multiple perspectives. The re-enactors are all volunteers with their own provisions and equipment, so that is no cost to the district. We are told this is one of the biggest re-enactment camp events in the state of Illinois and the Midwest.”

The event is staged at the Lakewood Forest Preserve near Wauconda, and admission to the grounds carried a $10 fee.

Civil War Days featured battle re-enactments, actors in historic roles, artillery pieces and authentic weaponry, sutler vendors and purveyors of period merchandise, along with Union and Confederate camps depicting the soldier’s life. Hamilton-Smith said that while the Civil War Days is not meant as “a moneymaker,” it is a flagship on the district events schedule.

In a June 24 district statement, which did not elaborate on the security reasons for the cancelation, Kyle stated, “Vigorous conversations have taken place in the past week at the national, state and local levels, regarding the Civil War Days event. Some of these conversations have led to security concerns. Security concerns must always be taken seriously, making a cancelation of this year’s event, the prudent decision.”

Ty Kovach, Lake County Forest Preserves executive director, also stated in the June 24 release, “After consulting with local and state law enforcement agencies, we made the decision to cancel the event due to public safety concerns. Our number one concern is the safety of participating Lake County residents and visitors, reenactors and vendors, as well as our staff and volunteers operating the event. They are our top priority.”

The cancelation of the 2019 Civil War Days is specific to this year’s event only, and does not impact the event for subsequent years, at this time.