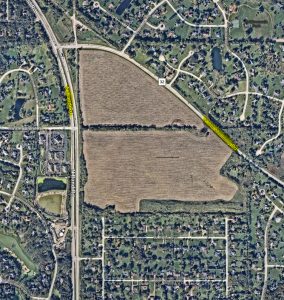 The 108.7-acre parcel near Route 120 and Old McHenry Road, owned by Naples-Florida-based RK123 LLC, was given a two-year extension to secure a developer and submit a commercial plan. (Photo courtesy of Lake County Government)

The prospect of a commercial development being built near Hawthorn Woods has been given life for another two years through an extension approval by the Lake County Board’s public works, planning, and transportation committee, during its Oct. 2 meeting.

The unanimous decision gives Naples, Florida-based RK123 LLC another two years to secure a developer and submit final plans for the project.

The committee recommendation now moves to the county board level for its own deliberations and vote, although the matter has not been placed on any meeting agendas at the present time. The extension, which was due to expire Oct. 9, is directly tied to a previous action by the County Board in 2017.

“We have not had the opportunity to review this action, or any updated status, on this parcel,” said Al Maiden, a planner for the Hawthorn Woods Community Development Department. “As such, we really cannot comment on this action, at this time.”

The 108.79-acre parcel, southeast along Old McHenry Road and its intersection with Route 12, has maintained a share of attention as a rural setting since 2010, when corporate general partners and property owners, Robert and Constance Dimucci, appealed to the County Board for a zoning classification change from Estate to General Commercial District. The parcel is still unincorporated and under county jurisdiction.

Debate encompassed many surrounding communities along the road leading to Long Grove and drew reaction from the Barrington Area Council of Governments. Formal opposition was registered by Hawthorn Woods in passing a resolution Feb. 12, 2002, against the change citing violations of county planning and the additional request for a “conditional use permit for nonresidential planned unit development and application for modification to extend (the) time period for (a) preliminary plan for certain parcels.”

The County Board approved a modified proposal In October that year, allowing a 450,000-square-foot section of retail development at the site, with an additional 250,000 square feet for office and specialty use space. The property owners initially proffered a plan for 800,000 square feet of commercial zoning.

Any remaining objections were assuaged when an intergovernmental agreement was brokered for Lake County, North Barrington, and Hawthorn Woods to split the generated retailer’s occupation taxes of the commercial development between themselves, as an addendum item to the approval.

The re-zoning classifications will not be effectuated until the submission of a final engineering plan and its subsequent affirmation is made by the county committee.

Certain stipulations covering “design elements” to coexist with the natural landscape were included in the approval plan such as 50 acres of open space encompassing almost 53 acres of high standard commercial construction.

The five-year span to engage a developer for the project was hampered by the declining economy and limited its forward progress. The county’s approval window was set to expire in 2017, when it allowed the two-year extension for the property owners to continue their effort. The newly granted extension will expire Oct. 8, 2021.

Corporate partner, Robert Dimucci, was not available for comment at press time.