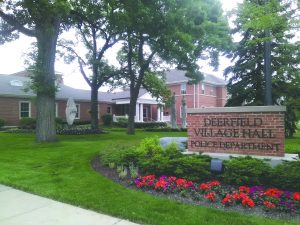 The Village of Deerfield intends to resubmit its appeal of a permanent injunction, after the Second District Appellate Court dismissal on procedure. (Photo by Gregory Harutunian/for Chronicle Media)

The Village Board of Deerfield was informed June 18 that its appeal of a permanent injunction placed on an assault weapons ban ordinance was stopped June 13 due to a procedural error, and will be submitted again.

The “Rule 23” decision was entered by the Second District Appellate Court.

At issue is the validity of an April 2, 2018 ordinance that essentially blocks the sale, transportation, and possession of semi-automatic weapons within Deerfield’s boundary. It also amended the village code regarding safe storage and the transportation of assault weapons to regulate the manufacture and sale of those weapons, along with any other semi-automatic weapons that accept large capacity magazines.

The 13-page ordinance, approved by a 6-0 vote, further defined types of semi-automatic weapons that are banned, and their accompanying ammunition. The ordinance took shape Feb. 20, that year, in the wake of the shootings at Marjory Stoneman Douglas High School in Parkland, Florida. The municipal legislation was a bold step, eventually creating a “weapons ban swath of contiguous borders between Highland Park, Deerfield, and Northbrook.

In issuing its dismissal, the appellate court cited a “lack of jurisdiction” and “premature filing” in the village’s filing which sought to reverse a March 22 ruling by Lake County Circuit Court Judge Luis A. Berrones. The lower court had also combined two separate civil lawsuits against Deerfield over the ban, one by Guns Save Lives, Inc. and William Wombacher III, and Daniel Easterday, the Illinois Rifle Association, and the Second Amendment Foundation, Inc., who commenced their litigation several days following the ordinance’s approval.

Village Attorney Steven M. Elrod had consulted with the village’s litigation attorney to get an understanding of the “Rule 23” order, elaborated upon, during board discussions.

“It is a procedural order, not a binding court opinion, which dismissed the village’s appeal, but not on substantive grounds. (They) believed the appeal was premature because Judge Berrones had not issued a final order, pursuant to Illinois Supreme Court rules, and they were not sure how Judge Berrones had consolidated the cases.”

The high court action now requires the village to return to Lake County court and obtain a final order which can be appealed, and also confirm how the two civil lawsuits were consolidated.

At that point, the case will be returned to the appellate level for a disposition.

Deerfield Mayor Harriet Rosenthal subsequently noted that misinformation was beginning to circulate that the village’s appeal was flatly denied. In addressing the misinformation, Elrod reiterated the village’s intent to resubmit the appeal, and said, “I have every confidence that this will be resolved.”

When contacted, Andrew Lichterman, Deerfield’s assistant village manager, said, “Lake County Circuit Court Judge Berrones had not yet issued a final order, pursuant to Rule# 304(a) of the Illinois Supreme Court, and that this is a procedural issue, which needed to be clarified before the village can file an appeal. It was not a substantive ruling on the merits of the case. As a result, the appeal is delayed until the trial court issues its final order.

“Yes, there has been public comment on the ban throughout the process,” he said.

In filing the lawsuit last year, SAF Founder and Executive Vice-President Alan M. Gottlieb, had said they moved swiftly to challenge this gun ban because it flew in the face of state law and entirely banned the possession of legally owned semi-auto firearms, with no exception for guns previously owned, or any provision for self-defense.

The ordinance’s language extended to rifles, shotguns, and pistols that act as a semi-automatic weapon, and the equipment that converts any weapon into a semi-automatic one. The latter provision included bump stocks, which replace a standard gunstock against the shoulder for rapid firing and absorption of the weapon’s recoil. However, the ordinance did not otherwise regulate or prohibit rifles, shotguns, pistols or ammunition.

Rosenthal said, in a statement, after the ordinance’s passage, “I believe the time has come to revisit a complete ban on assault weapons. We hope our local decision helps spur state and national leaders to take steps to make our communities safer.”

No timetable has been set for the circuit court clarification, as an entirely new briefing schedule must be forwarded.