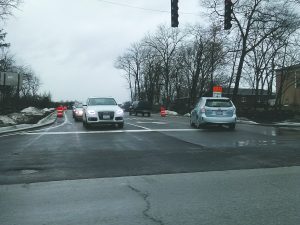 Millburn Road at Route 45 was originally the top of a T-intersection, and is now a throughway to the western bypass. (Photo by Gregory Harutunian/for Chronicle Media)

Officials from the Illinois Department of Transportation are expecting the substantive work on the “Millburn Strangler” western bypass project to be completed later this fall, and open for use by vehicle traffic.

The final phases that require landscaping and ancillary construction will take place this fall, and into spring 2020.

The four-lane bypass follows a 72,000-foot bell-shaped curve, from Country Place to Independence Boulevard, and skirts west of the original straight line along Route 45 that intersected with Millburn and Grass Lake roads. The original quarter-mile stretch attained a legendary status for its miles-long traffic backups, during peak travel times and weekends. Signals and protected turns governing the traffic flow only added to the delays.

At present, Millburn Road is open past Route 45 to the bypass. Grass Lake Road, from Route 45 to the bypass, has been completely blocked. What remains to be seen is how well the bypass planning was executed in alleviating the traffic backups or merely moving it west with the addition of several traffic signals in area subdivisions.

“There have been no issues with backups, and we will continue to work with residents to help address any concerns they might have,” said Guy Tridgell, IDOT’s District 1 communications manager. “We switched traffic to the new Grass Lake Road alignment last February, which will continue through the duration of the project. The existing Grass Lake Road portion is closed, and a cul-de-sac will be constructed in a later stage.”

The northern portion of the bypass, exiting onto Route 45, is still being readied for paving and light-standard installation. Vehicles still must travel Route 45 to go in north-south directions, but will encounter the intersection tie-ups, as well as roadwork flaggers for one-lane closures and different traffic patterns.

“The north part of the bypass has endured some delay in getting utility lines relocated before the new pavement could be constructed,” said Tridgell. “Currently, we’re on pace to begin paving in mid-April, weather permitting, wrapping up in early May. Every effort will be made to open to traffic as soon as possible, but we’re looking at the fall of 2019 for substantial completion.”

Although technically an IDOT project, Lake County had committed $34 million in funding from its portion of the retail sales tax, set at one-quarter percent, which was made in 2011. Cost overages and overruns are being paid by the state, which also identified 31 parcels for easement acquisition. Those properties led to the purchase of a home and property at the Route 45-Millburn Road intersection, formally a “T” configuration, next to the Millburn Masonic Lodge.

“There was some delay in obtaining the necessary property, prior to construction, but it did not impact the overall project schedule,” Tridgell said. “The roadbed was finished, and is now open.”

Located in the Millburn Historical District, of Old Mill Creek, utility companies were the first to break ground on the bypass project for the relocation of service lines. Contractor bidding began in April 2018, with Wauconda-based Berger Excavating, Inc. being awarded the job order for its submitted amount of $15.58 million. Lake County is paying 100 percent of the construction cost although it became an IDOT-led project, when the bid was accepted.

The project had been discussed for decades, and some platted land was acquired more than 25 years ago. Some of the land was acquired close to 25 years ago. The project gained traction in 2009, when a panel of county, state, and federal highway officials met to discuss 18 varied proposals for alternative roadways. Reduced to four considerations, Alternative No. 4, known as the western bypass, was selected.

“The southern part of the bypass is almost ready,” said Tridgell. “Obviously, we want this open to traffic as soon as possible.”