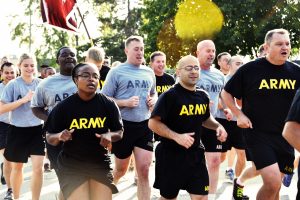 Military personnel are at the front entrance of the Fort Sheridan Resource Center. (Photo by Karie Angell Luc/for Chronicle Media)

The run began at the Philip H. Sheridan Reserve Center on the renowned Fort Sheridan site with a route through downtown Highwood. Military personnel wore matching clothing and civilians were invited to jog or walk, too.

Doing her part in patriotic clothing was Lupe Gallardo of Grayslake, president of the Grayslake Running Club.

“9/11, it’s a day that many of us will never forget,” Gallardo said. “I know I won’t certainly forget where I was at when it all happened. I’m here to pay tribute to all of those who lost their lives and for those who continue to serve our country.” 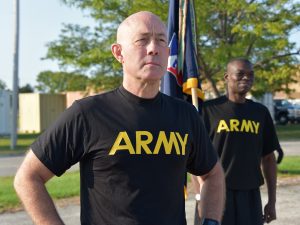 The morning included a moment of silence and the Pledge of Allegiance. The walk/run, as a community builder, was not meant to be competitive.

“9/11 is a day that I think affected all of us,” said Highwood Mayor Charlie Pecaro.

Pecaro spoke to participants shortly before the race stepped off on a blue sky day with temperatures in the 50-degree range.

“It’s awesome to be here,” Luckey said, of the honor of recognizing 9/11 with the event. 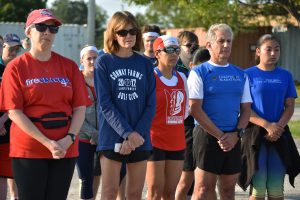 Luckey also recalled Sept. 11, 2001 and said he was in North Carolina and in communication with government colleagues as events unfolded.

“I remember vividly where I was,” Luckey said.

LTC Kevin P. Coleman of Great Lakes Training Division ATO welcomed civilians on a day that would be his last during his several decade career.

“This is a day for remembrance, resolve and renewal as we come together to remember,” Coleman said.