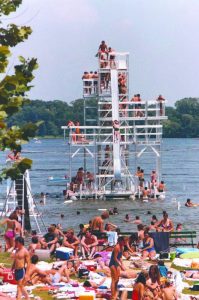 The most-remembered thing about the Wauconda beaches was the J-Slide, created by Stanley Jachec. (Photo courtesy of Wauconda Parks and Recreation District)

As summer turns to the dog days of August, southwestern Lake County residents will have to wait until next year to use the iconic Phil’s Beach in Wauconda.

The arrival of an estimated $400,000 matching grant through the Illinois Department of Natural Resources delayed the beach’s planned grand opening for this season in favor of better amenities such as a bath house, a dual-use concession stand and lifeguard station, and sidewalk extensions.

Purchased in 2016, the village’s Park District Board approved the purchase of the 3.5-acre site with a unanimous 5-0 vote, during its Sept. 13 meeting that year, at a cost of $690,000. The Phil’s Beach site, located near the 300 block of N. Main Street, was the “go-to” summertime spot with its famous “J-Slide,” standing nearly 45 feet high. The Village Board approved a conditional special use permit at its May 15, 2018 session, and set the stage for a $3 million project with contract bidding opened for construction.

“The grant came through the Open Space and Land Development (OSLAD) and we went through the application process,” said Nancy Burton, the village’s Parks and Recreation director. “It came out April 2019 and with everything pushed back four months … to open this year would have been very difficult. The good news is that everything is on schedule for opening next year.

“Part of the whole experience, and history, is the ‘J-Slide’ which still stands on a corner of the property. The slide will remain there, for the foreseeable future, and provide a lot of photo opportunities,” she said. “It’s part of the whole history of Phil’s Beach. What we’re adding to the mix is the bathhouse and guardhouse with a concession stand inside. Where it will eventually be placed has not been discussed yet.”

The beach closed in 1990, due to insurance obligations and costs. The Reilly family, descendants of original owner, Phil Froehlke, were the last owners of the attraction. Froehlke opened Phil’s Beach opened in 1926, on the western side of Bangs Lake and only a short walking distance away from the historic Main Street downtown area.

Phil’s Beach was adjacent to Sunnyhill Beach, which opened in 1945, was owned and operated by the family of Stanley Jachec, who invented and erected the slide. That 3-acre parcel was purchased by Jachec’s mother, who was passing through Wauconda, using a $10 down payment given to the owner, the former mayor of Wauconda.

Sunnyhill Beach did not close until 1992, again from high insurance premiums. Equipment was given away, and the property later sold to investors for residential development. Jachec passed away in September 2014. During their heyday, both sites were popular with weekend tourists.

Wauconda officials are hoping to rekindle the interest in the lakefront beach and bring people to visit the town with the many retail and eating establishments.

A boardwalk that will circumnavigate the beach is now completed, and already visible, while work crews erect the structures that will appropriately alter the parcel’s appearance. A splash park and picnic pavilion are also in the mix.

At the time of the permit’s issuance last year, stipulations of fencing along the perimeter of the parcel and beach were a requisite demand, as well as landscaping to remove dying shrubbery and invasive plants on the south property line as a gateway to mounding a berm, or buffer separation.

“I keep thinking about the some type of grand opening, but we’re not far enough along in the process yet,” said Burton. “We want to keep forward movement on the entire effort, so everyone will see positive results.”