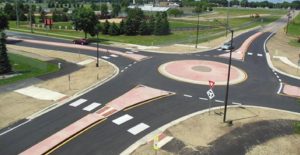 A design depiction of the traversable mini-roundabout installed in Gurnee. (Courtesy of the Village of Gurnee)

A mini-roundabout at the intersection of Dada Drive and Almond Road in Gurnee quietly opened during the last week of August, with almost no fanfare and capped a resurfacing project that had taken most of the summer to complete.

Part of an overall $11.7 million capital improvement, nearly $1.2 million was carved specifically for the mini-roundabout as a means of relieving traffic congestion.

The intersection is located between Washington and Grand avenues in a residential neighborhood with speeds of 30 mph., and a magnet for back-ups due to the proximal Bittersweet Golf Club, as well as the morning and afternoon traffic for students at the Woodland schools. Speeding issues through the area have also been problematic for village officials.

“Essentially, we reviewed the best options for the intersection by looking at the traffic issues,” said Jack Linehan, the assistant to the village administrator. “A study showed there was no warrant for a traffic signal, although a significant traffic increase in the next 30 years was identified. The mini-roundabout design was deemed the best route to take. The Federal Highway Authority reviewed our plans, and concurred.”

The mini-roundabout differs from a traditional larger roundabout is the space required for its installation, making less of a footprint and property acquisition for right-of-way access. The purpose of a roundabout is to maintain a continuous flow of traffic that moves to the right of a circle, with exits at the various street points. Drivers approaching the circle must yield to traffic already making the circuit.

The mini-roundabout has a traversable center that allows larger vehicles, such as a bus or truck, to navigate over the center. It also has a circular walkway on its perimeter. A traditional roundabout has the sight lines of oncoming traffic hidden from view, with a raised center.

“Safety issues are no different than an intersection with stop signs or a stop light, if a driver is going to go over the top,” said Linehan. “With the capital plan, we were already looking at the resurfacing for Almond Road, and wanted to address the traffic problem, too.”

A water main project on Almond Road, undertaken by the Lake County Joint Action Water Agency, replaced the existing piping with new infrastructure that placed connector lines with jurisdictions for Lindenhurst and Grandwood Park. The shifting traffic patterns to accommodate the construction sent vehicles on a winding, detour path through several residential areas with a few outlets to Grand Avenue, and created some complaints resulting from the increased vehicle traffic.

With the mini-roundabout now open, work crews are concentrating on lining and lane markings along Almond Road and several side streets.

A major lynchpin of Gurnee’s capital improvement plan is a new water tower to be built on Knowles Road, near its intersection with Rollins Road. The project includes removal of the old water tower by Gurnee Fire Station No. 1 at a total cost of approximately $7 million, and is expected to be completed by 2020. The village board unanimously approved the project at an early Mar. business session.

Linehan noted that the Illinois Department of Transportation project involving the resurfacing and widening of Grand Avenue will improve traffic flow through the village.