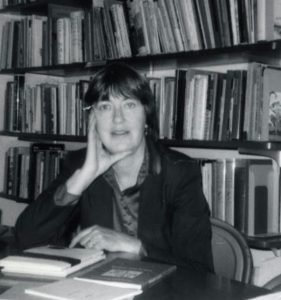 Lisel Mueller, the “Poet Laureate of Lake Forest,” in a 1981 photo. (Photo by Lois Shelton)

In a figurative and literal sense, Lisel Mueller, found her writing voice after fleeing Nazi Germany with her mother and sister in 1939. She learned a new language and became a poet with a unique style that quickly connected with readers. Mueller, 96, died Feb. 21 from the aftermath of pneumonia at the Admiral of the Lake retirement community in Chicago.

Her work reflected the immigrant experience, encompassing the loss of homeland and a previous life, while embracing new ways, domesticity, and the emotions that accompany it. She received the Carl Sandburg Literary award in 1990, and was honored with the Pulitzer Prize in 1997, for her collection, “Alive Together: New and Selected Poems.”

“The staff of the Lake Forest Library extends its warm condolences to the family of Lisel Mueller,” said Joy Schmoll, the library’s head of communications. “It is an honor to have shared this community with the ‘Poet Laureate of Lake Forest.’ New and returning readers can borrow her award-winning poetry books from the library. We are heartened that her words live on and will continue to inspire poets and thinkers for generations.”

In coming to the United States, her family reunited with her father, Fritz Neumann, in Winnetka, and then, in Evansville, Indiana where he taught at the University of Evansville. She met her husband, Paul, at the college, married, and they eventually moved to a rural area outside of Lake Forest. The creative side led to six books of poetry, in addition to lecturing and teaching.

In a 1976 interview with the Chicago Sun-Times, she said, “My poems are very personal, they generally start from a concrete experience, a specific situation, and then they take off to something else. Years ago, when my daughter had trouble with the concepts of time, she made a list headed, ‘Things I will need in the past.’ That heading triggered a poem I called ‘Palindrome.’ It was about a woman moving backward in time, from death to birth.”

According to the Sun-Times article, she said a Western Union operator contacted her, “You were awarded the Pulitzer poetry prize today. Congratulations.” The operator added, “It’s nice to deliver some good news for a change.” Mueller was unaware that she was in the running. “But I will not deny that I enjoy having recognition and have people come to my readings,” she said.

She taught at Warren Wilson College, Elmhurst College, the University of Chicago, and Goddard College. She wrote literary critique for the Chicago Daily News and Poetry magazine. She won the Ruth Lilly Poetry Prize in 2002, the National Book Award in 1981 and was invited to read at an evening of poetry at the White House during the Carter administration, among her many honors.

Interest in her works has also gained popularity in her native Germany, as they awarded her the federal Order of Merit, and was feted by Gen. Wolfgang Moesslinger in a pinning ceremony last year, at her retirement community

From her poem, “Why We Tell Stories,” she wrote: “Because grandmothers looking like spiders want to enchant the children, and grandfathers need to convince us what happened happened because of them, and though we listen, only haphazardly, with one ear, we will begin our story

Mueller is survived by her daughter, Lucy, and one grandchild. No public service is planned and arrangements are all on a private basis.