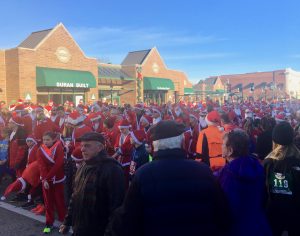 More than 1,000 Santas took to the streets of Crystal Lake on Dec. 4.  Among them were Lisa Kippley and Ben, her 3-month-old son, perhaps the youngest Kiwanis Club Santa Run participant.

Last year, Ben had just made his presence known to Lisa and her husband, Jeremy. Like many local families, the Santa Run is now tradition, creating fond memories.

“Last year I did it with my step-dad,” said Lisa, “This year, the whole family is doing it.”  That includes Lucky, their dog.

Voices in Harmony opened the event with the Star Spangled Banner.  Participants raised more than $100,000 for local causes. This year, 20 percent of the funds will go to Kiwanis Club, to be distributed to programs serving children in the area. The rest is divided equally among Turning Point, CASA, Big Brothers Big Sisters, and Main Stay Therapeutics.

Always the first Sunday in December, the Santa Run is in its sixth year. Runners don provided Santa suit or a red long-sleeved shirt for the 5K walk/run, which started at the Raue Center for the Arts in downtown Crystal Lake.  Some participants wear their own costumes. Several years included Buddy the Elf-costumed runners. 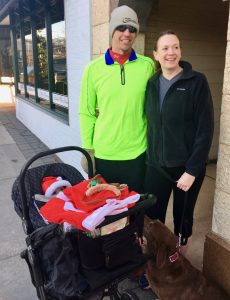 Santa trophies go to the fastest 5K runners, but the object is to have fun running, and of course, to raise funds for local children’s organizations.  This year, 20 percent of the funds go to Kiwanis Club, to be distributed to programs serving children in the area. The rest is divided equally among Girls on the Run, Turning Point, CASA, Big Brothers Big Sisters, and Main Stay Therapeutics.

Splitt remembers running to and from school when he was in kindergarten at Ridge Elementary in Arlington Heights: run one-half block, walk one-half block, all the way to school and back. By junior high, he was on the cross country and track teams. Running is just part of who he is. Giving back to the community is part of who Splitt is, too.

Why the Santa Run?

“Because I can,” he said. “I have a great committee that makes it happen.” He loves seeing the ripple effect of working together for a common cause. 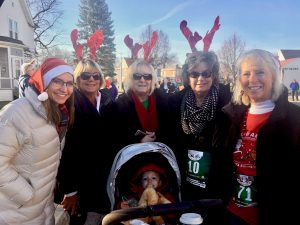 Splitt grew up in an environment that fostered cooperation and collaboration. Adopted when he was 3 days old, he has one handicapped sister. His mother died when he was in eighth grade. His father married a widow with 11 children. The couple went on to gift Splitt with three more siblings.

The sponsors, participants, and volunteers who pull together for the causes represented are credited for the success of the annual Santa Run. They include the Running Depot, Centegra Health Systems, STAR 105.5, Neis Insurance, IN Sync Systems, Intren, BMO Bank, Northwest Herald, Great Lakes Credit Union, First Midwest Bank, Erie Insurance, and Georgio’s Pizza.