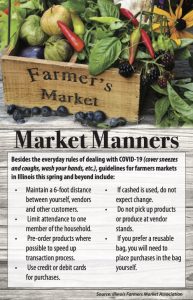 Please don’t squeeze the cherries — or anything else, for that matter.

Area residents are finding a different kind of farmers markets as the annual spring and summer outdoor selling posts begin to open.
The biggest change is that the open-air markets are going from a home for the meanderers to mission-driven environments.

“This season, farmers markets are transitioning from community gathering spaces to transaction-based markets, or IN-and-OUT Markets,” the Illinois Farmers Market Association said in posting customer guidelines for the 2020 season.

“Farmers markets are going to look different this year,” said Natalie Kenny Marquez, president of the association. “… They are going to be less activity centers and more essential businesses where you go and get groceries.”

She said the rules will vary per individual market, but shoppers should not be surprised to see:

“There might be a few less vendors too,” Kenny Marquez said. “Markets need more space.”

“We needed to broaden our footprint,” Jason said.

She said by the time the Grayslake market opens June 3, she expects residents to be accustomed to the new guidelines.

“We’ve got test cases being run by those spring markets in operation,” Jason said. “By the time Grayslake joins in for the summer, the guidelines will be the new normal.”

She noted that Grayslake, which normally runs a 37-week farmers market, scratched the spring dates from its calendar when COVID-19 concerns ramped up.

“We usually operate in the spring, but we decided not to have the market for public safety,” Jason said. “Some people said we should have had it because they would prefer being at an outdoor market compared to being in a grocery store,” Jason said. “Then there were others who said we should stay home and be safe.”

She said people on both sides of the issue understood why the decision was made to forego the spring weeks of the market. Jason said she thinks people will also abide by the new guidelines.

“The overall goal is that we want vendors, the community and the shoppers to be safe,” Jason said.

She said that so far, the Grayslake market, which is run by a nonprofit group, is at full capacity for vendors.

“They’re anxious to get their product to market,” Jason said.

As for the Gurnee market she also oversees, Jason said the event is still up in the air.

“That market is sponsored by the village and the village will make the decision on that,” Jason said. “They will tell me when a decision is made. Everything is under consideration, even canceling the market as a safety precaution.”

The Gurnee market is normally the third Sunday of the month from July through October.

Jason said a set of guidelines has already been issued for the Grayslake market.

“Do not bring kids. Do not bring dogs. Keep social distance. You can’t touch things,” Jason said. “People are encouraged to preorder and prepay.”

Leslie Cahill with the Wheaton French Market said that hopes are to open the market in mid-May.

“Right now, we are working with our various community partners, including our partners at Wheaton (City Hall) to figure out the safe ways to open up our markets,” Cahill said. “The safety measures you are seeing spoken about in the media are the same sorts of measures that we will be taking at our market.”

She said the Wheaton market, as any farmers market in the state, is using the Illinois Farmers Market Association guidelines as a basis for operations going forward.

IFMA’s Natalie Kenny Marquez said there could be a bit of an adjust period for some regular farmers market patrons.

“It might take a little while to get used to what you are seeing,” said Kenny Marquez, who oversaw Urban’s Market at the Square for five seasons, and now runs Grow Marketing and Communications in Champaign.

She said farmers markets are a great opportunity to support local businesses and provide people concerned about transmission of the coronavirus an avenue.

“Less hands touch the product on the way to the consumer,” Kenny Marquez said.

She said most farmers markets in the state are going forward despite the pandemic.

“I know a couple were pushed back a week or two because they are looking at how to make it happen with all the guidelines they have to follow,” Kenny Marquez said. “So, it may be on the starting day people are used to, but the markets are still happening.”

She expects people to be able to adapt to the new normal at farmers markets, noting people have been doing some of the things for a while now at grocery stores.

Kenny Marquez said market patrons using cash may see their bill rounded up or down to eliminate the touching back and forth between vendors and customers.

She said checking to see if a certain farmer offers preorders and curbside pickup is another proactive step that market patrons can take.

“We want to stress the in-and-out component, people going and getting what they need,” Kenny Marquez said.

The IFMA president said the farmers she has talked with are ready to get the open-air markets going.

“They are excited to be there. It is where some of them make most of their money,” she said.