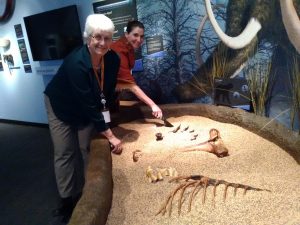 The Lake County Museum was once housed in a barn on Wadsworth Avenue, just east of the intersection with Route 41.

Through the 1960s, its viewing items were basically limited to dioramas, Civil War uniforms from county regiments and period dresses, and a mastodon bone. The femur ossein was discovered in the middle of downtown Antioch by work crews fixing a water main, retrieved as the full skeleton sank back into the mud.

The museum’s most prominent home was at the Lakewood Forest Preserve, near Wauconda. Reborn as the Lake County Discovery Museum, it contained interactive displays, the “old friend” Mastodon bone, and the Curt Teich collection that contained an estimated 2.5 million items. Comprised mostly of postcards from bygone eras, the collection proved to be the single most important visual and cultural depictions of Lake County and cultural history.

The Teich collection was transferred to the custody of Chicago’s Newberry Library in October 2016, nearly one month after the museum had closed its doors and packed away the artifacts in anticipation of moving to another facility. 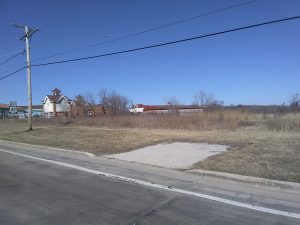 The original site of the Lake County Museum in Wadsworth. (Photo by Gregory Harutunian/for Chronicle Media)

That anticipation ran high March 24, with the grand opening of the Bess Bower Dunn Museum of Lake County. A March 23 soft opening at the new facility, located at 1899 West Winchester Road in Libertyville, was meant to “shake off the dust” and make sure everything was going to run smoothly. And yes, an “old friend” is prominently displayed.

“The Mastodon bone is there, and it’s part of a paleontology wing,” said Laura Weber, Communications Specialist for the Lake County Forest Preserves, which operates the museum. The wing also contains the world’s first scientifically-accurate, life-sized Dryptosaurus, created by paleo-artist Tyler Keillor. The dinosaur is 20 feet long and Tyrannosaurus-like in its features. Dryptosaurus bones have been found in the Midwest, scattered by retreating glaciers, and existed about 67 million years ago.

According to a press release, “The Dunn Museum provides a chronological walk through Lake County’s history from prehistoric times to the present, as well as directs visitors to explore the land on which the history took place.

The Museum is named for Bess Bower Dunn (1877–1959), Lake County’s first official historian who traveled throughout the county photographing historic sites and meeting with residents to record their stories. She personally acquired many of the artifacts and documents that are now part of the Dunn Museum’s priceless collections. 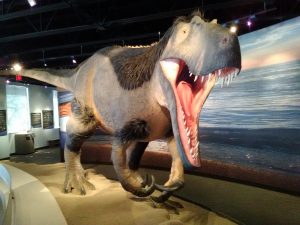 The museum hosts a scientifically accurate representation of a Dryptosaurus, and greets visitiors upon entering. (Photo by Gregory Harutunian/for Chronicle Media)

“The Dunn Museum is among only 5 percent of museums nationally to have earned accreditation from the American Alliance of Museums, an industry mark of distinction. In fall of 2016, after 40 years of operation (in Wauconda), the … process of packing and moving the vast historic collections, which comprise nearly 20,000 artifacts and 1,000 linear feet of archival materials, took over a year to complete. The new central location at the Lake County Forest Preserve General Offices provides twice the gallery space.”

The approximately 12,000-square-foot museum was named for Dunn in February 2017, as a way for the preserves to honor an active and life-affirming character with a wide array of interests. She was active in the Daughters of the American Revolution, the Lake County Art League, and appeared in a short film, “The Boxing girls,” made by Waukegan’s Edward Amet, the inventor of the “Magniscope,” the forerunner to the modern motion picture projector. She was also a founder of the Lake County Historical Society.

First-time visitor Jennifer Ashley was amazed at the exhibits. “Some of these have never been displayed before, but now they have room. I like the dinosaur, the mastodon bone, and found a picture of my great-grandfather in a group photo.” 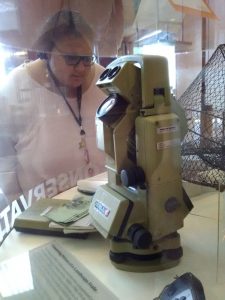 There are five wings including: Prehistoric Lake County, the county’s earliest history through the last ice age; The First People, the stories of Native Americans in Lake County; An American Frontier, which shows how Lake County was settled by non-native people with a reproduction of a one-room schoolhouse; Innovations and Preservation, from the decades following the Civil War when expansion of railroads and highways brought a boom in industry, agriculture, and Woodland Theater.

“My hope is that the museum makes people feel grounded and connected, whether through an artifact or photograph,” said Nan Buckardt, director of education for the Lake County Forest Preserves. “Lake County has a long and deep history, and visitors need to know that they are part of it.”

The gallery and gift shop are open from 10 a.m.-5 p.m., Tuesday through Saturday, and from noon-5 p.m. Sundays. The museum is closed Mondays.