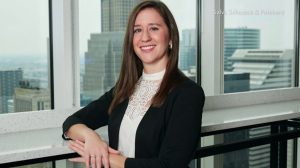 Elizabeth Rae Olszewski, 32, a catastrophic injury attorney with the Chicago-based firm of Salvi, Schostok, and Pritchard P.C., was the lone fatality in a two-vehicle crash that occurred near Yorkville, Wis.

The Feb. 9 accident cut short the life of a well-respected young person that valued family over career and volunteered her time with the Waukegan 2 College (W2C) program as a mentor.

The SUV that Olszewski was riding in with family, returning from Milwaukee to see a production of “The Lion King,” was headed westbound on Highway 20, near 63rd Drive, when an eastbound vehicle crossed the center line and struck the SUV head-on. There were nine people injured in total, and “extreme” weather conditions are believed to have contributed to the incident, according to the Racine County Sheriff’s Office.

The Union Grove native had purchased a home in Mount Pleasant, in order to remain close to her family including a niece and nephew. She was one of 18 attorneys working from the law firm’s Waukegan branch, and had refused a position with the main Chicago office, which required a further distance from her family.

“The Racine area was closer to the Waukegan office, and family, and more important than the main opportunity in Chicago,” said Patrick Salvi, the firm’s chairman. “We hired her, right out of law school, and I had personally lobbied her to come to Chicago, for the benefits and opportunity … she was polite, but firm in her decision. She wanted to remain close to a number of people, including her mother, and family with siblings, niece and nephew.”

“I think one of the more endearing qualities she had was being the type of person that was never envious, or insecure of her own abilities or accomplishments,” he said. “She would be the first person to congratulate a colleague in the firm on a case. She was inspired by other lawyers to accomplish greater settlements and verdicts.”

Since 2017, she was annually named a “Rising Star” by the Illinois Super Lawyers, and was accorded the honor of “Emerging Lawyer” by Law Bulletin Media, which reflects only the top 2 percent of practicing Illinois attorneys with less than 10 years of experience and younger than 40 years of age.

Olsewski also volunteered her free time with the W2C program in mentoring young people with “limited resources” navigating through the college application process. The program’s website states, “It is our mission at W2C to create brighter futures for students, families and the community by helping students prepare to enroll in and graduate from college.”

“Her efforts with the program were an example, she would personally take the students into her office and show what her profession was about,” said Salvi. “She loved the law.”

Her firm provided a statement: “When she wasn’t tirelessly working up a case for one of her clients, Elizabeth volunteered with the ‘Waukegan 2 College’ program, a nonprofit organization focused on providing assistance to students who have limited abilities in navigating the college application process, such as language or financial barriers. Elizabeth became involved with the program after she was invited to a luncheon hosted by the organization. After learning about how the program helps Lake County students, she decided to join and was connected with a mentee.

Salvi had also said his firm would not handle any of the potential litigation for the injury claims, considering it inappropriate, but would direct the family to another firm for counseling, at this point.