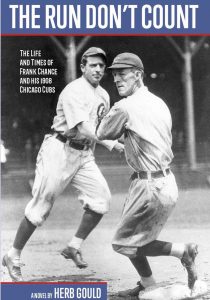 “The Run Don’t Count: The Story of Frank Chance And His 1908 Chicago Cubs” is a novel that surrounds its plot with a true account of the team’s daily happenings, all told by an unlikely narrator: a bat boy.

It was said by the late Waukegan newspaperman, Dan O’ Shea, that “Every reporter has one good book in them.”

The lack of sports events during the pandemic has left a large hole in the lives of some people, while others have filled the void by catching up on their reading. What better place to start than with a novel by Herb Gould, a former Chicago Sun-Times sportswriter?

“The Run Don’t Count: The Story of Frank Chance And His 1908 Chicago Cubs” is a novel to be sure, but a different type that surrounds its plot with a true account of the team’s daily happenings, all told by an unlikely narrator: a bat boy. This is the downside period of the glory years when the Cubs were a feared club and the legendary infield of “Tinkers to Evers to Chance” was immortalized in a poem by Franklin Adams.

A spoiler alert: the story ends with the bat boy, now elderly, sitting in the stands of Wrigley Field, full of hope for the team, hope for life … in 1969. History tells us what happened that year to the Cubs. Why pick that year?

“I was a vendor at Wrigley Field in 1969, an extra when they needed labor help,” said Gould. “I was on the ground crew, swept the stands in the upper deck after a series, helped roll the tarp on the infield … I was a 17-year-old kid and a lifelong Cubs fan. To be there that year, with all that stuff going on, it was all near and dear to me. I’d like to think I may have sold the narrator a Coke.

“The novel has a lot of newspaper asides and references, reporter’s insider stuff. The great thing about newspapers is the connection to people,” he said. “It was a labor of love. As a sportswriter, I used to travel around 25,000 miles a year, trips with other writers that are now gone from the newspaper world, and my working world. Write what you know, I’m a big fan of that.”

Gould grew up in Deerfield, near the high school on Route 43, playing in the nearby fields, where his father raised the family and owned a drug store in Lake Zurich. He fondly remembers riding up and down Route 22, with his father and brother, to work there.

“I can still call out the markers at certain mile points, and Deerfield seemed like the edge of the world,” he said. “We could ride our bikes forever and ever. We loved it.”

He received a master’s degree in journalism at Northwestern University, worked at the Chicago Daily News for one year, before signing on with the Sun-Times, from 1977 until retirement in 2013. He always covered the local angle of a major sports team, as in writing about the Padres in 1984, when the Cubs lost the playoffs. However, he always recalled a quote, by the late New York sportswriter Jimmy Breslin: “Go to the loser’s locker room, that’s where the story is!” 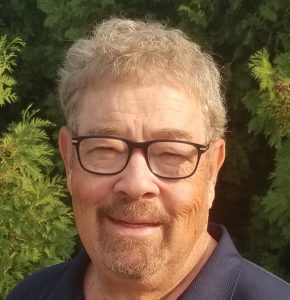 After the glory years of an athlete are diminishing and coming to a close, the greatest moments of their lives is what happens afterwards.

“I first got the book idea in college, but didn’t know what or how to do it. If a novel could bring the characters to life, that’s different,” he said. “There are so many nonfiction stories from that era. I wanted to have the filter of a kid because if it was just Frank (Chance) and other players, it’s not the same. The kid has narrator observations, while not immersed, giving more latitude as a writer.

“There’s actually two or three games folded in the book’s middle, a little biography of Harry Pulliam (the sixth National League President). Keeping order in a disorderly time, he was a fascinating complex character and the narrator bat boy got close to him. I wanted to show how the downside went for (Joe) Tinkers, (Johnny) Evers, and Chance, and followed them through the end of their lives.

“The guy ends on a hopeful note, things were looking good in 1969,” said Gould. “If things start again, I’ll be interested in the 2020 Cubs. They still have a great core but it’s usually about pitching … you saw that in 1969, with the New York Mets.

“Overall, this has been very rewarding to feel relevant in that people are reading your work,” he said. “I’ve covered a lot of the dark stuff … sports has the chance for a lot of good outcomes.”

The book is available at bookstores, on “The Run Don’t Count 1908 Historical Cubs Novel” Facebook page, and through Amazo