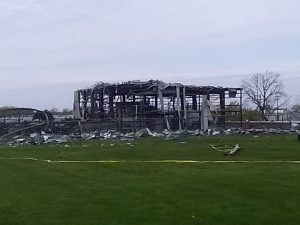 The remains of the AB Specialty Silicone, Inc. plant in Waukegan, following the May 3 explosion. (Photo by Gregory Harutunian/for Chronicle Media)

Tremors that shook sections of Lake County at approximately 9:45 p.m. May 3 emanated from an explosion at the AB Specialty Silicone, Inc. plant in Waukegan.

As of press time, no cause had been determined for the incident. Four people were sent to area hospitals due to injuries from the blast, as authorities worked through the night battling the spread of flames causing heavy smoke to drift into a residential neighborhood, south of the site.

Additionally, as of Monday at least three people were confirmed dead, with one person still missing. Two people were treated at the site, and released. Names of the injured and dead have not been released.

Social media posts by the Lake County Sheriff’s Department, alerted residents to the incident around 10 p.m., with Waukegan and Gurnee fire departments being the first units to respond to the location at 2161 Northwestern Ave. An inter-departmental Mutual Aid Box Alarm System call was initiated to a Level 3, bringing fire and emergency response crews from Lake, Cook, and McHenry counties.

The Bristol, Wisconsin Fire Protection District also participated, as did numerous hazardous materials units from Cook County, including Hoffman Estates and Elk Grove Village. MABAS box calls allow for a wider array of specialized resources from emergency response units outside of a given area, once the local units have been “tapped out.”

The four injured people were taken to local hospitals: two individuals went to Waukegan’s Vista Medical Center East, and two others were transported to Libertyville Advocate Condell Medical Center. Family members waited nearby at the grounds of the Burris Equipment Inc. site, northwest of the Green Bay Road and Sunset Avenue intersection, for word on injuries.

The blast occurred at around 9:45 p.m., and one hour later, a perimeter had been established for emergency responders only, as Haz-Mat units from different municipalities positioned themselves onsite. The Illinois Department of Transportation was dispatched and brought several large dump trucks of sand.

In a press staging area, Waukegan Fire Department spokesperson Steve Lenzi said authorities were working with plant personnel to ascertain how many were in the facility, and later, recovery and search teams believed nine people were in the plant. Lenzi also said the heavy structural damage indicated an explosion. By 1 a.m., it was estimated that more than 30 pieces of equipment were on the scene handling the incident.

Around 2 a.m., a convoy of Division 3 MABAS units from Schaumberg, Rolling Meadows, and Glenview arrived for Haz-Mat detail, while Libertyville and Mundelein added pump engines.

“A friend alerted me … she was driving near there, when it happened … there were blocks of concrete strewn on the road way,” said Ken Miles, an independent videographer, documenting the event. “The fire department started coming, as she left. Myself, I’ve seen plumes of smoke and the fire flared up a few times.”

The Waukegan-based AB Specialty Silicone, Inc. produces and distributes custom-formed silicone products for different companies. The location is in an industrial park, which once was part of the original Waukegan Airport landing area, and situated near the Gurnee-Waukegan municipal border.