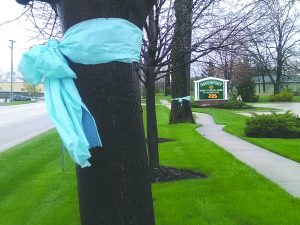 The Davenport Family Funeral Home and Crematory hosted a visitation for Andrew “AJ” Freund May 3. Blue bows adorned the trees around the funeral home in memory of AJ. (Photo by Gregory Harutunian/for Chronicle Media)

On an overcast day, several thousand people from Crystal Lake, McHenry County, and farther away came to the Davenport Family Funeral Home and Crematory to pay their respects to a child many never even knew.

A May 3 visitation for Andrew “AJ” Freund, the 5-year-old boy who died under tragic circumstances allegedly at the hands of his parents, was given a showing of love that he probably never knew in life from a community that has come to embrace him.

People congregated through the flagged queue, and waited, well before the 1 p.m. admission to the facility, and people stood nearby after the 8 p.m. closing. The color “blue” was evident in clothing, balloons, and stuffed toys while blue bows were tied to trees and utility poles in lining the route to 419 E. Terra Cotta Drive in Crystal Lake.

Administrators at the funeral home had planned for a large number of people.

“We prepped for about 2,000 people in hosting this visitation,” said Funeral Director Kim Nordin. “The family approached us about hosting it, and we were honored to do it. We wanted to take care of him, as we would our own family.” The interment services were private for family members only, and no information was given.

The Crystal Lake Police brought its honor guard to the service.

“We were there to protect ‘AJ’… the people that were supposed to protect him didn’t,” said Crystal Lake Deputy Police Chief Thomas Kotlowski. “That’s why we were there. It is not the outcome that we wanted.”

Earlier in the day, Andrew Freund Sr., the boy’s father, appeared at a status hearing in the McHenry County Courthouse. Circuit Court Judge Robert Wilbrandt appointed Henry Sudgen, a special public defender, to represent him, because Freund Sr. could not afford an attorney.

His parents, Freund Sr. and Joann Cunningham, are charged with his murder, and numerous felony counts, including concealment of a homicide.

The child was reported missing April 18, triggering a search that eventually centered on the family home at 94 Dole Ave. The parents had been the subject of neglect and abuse claims by the Illinois Department of Child and Family Services, as well as numerous service calls by the Crystal Lake Police Department over a five-year period, spanning the boy’s life.

His body was discovered April 24 in a rural farm field, south of Woodstock, wrapped in plastic, covered with straw in a shallow grave. The father allegedly confessed, early that morning, after being confronted with forensic cell phone data and a recovered cell phone video depicting alleged abuse by the mother.

His death occurred after being forced to stand in a cold shower for an extended period of time, due to lying about soiled undergarments, and was allegedly beaten to death. The McHenry County Coroner’s statement attributed the cause and manner of death as blunt force injuries to the head.

The graphic details of the murder, along with the subsequent actions of the father, emerged May 1 and began circulating in media outlets.

McHenry County Circuit Court Judge Sharon Prather sealed the documents May 2, making them unavailable, following a motion by State’s Attorney Patrick Kenneally. Kenneally had said he would not comment on the case.

Cunningham, who also was appointed a public defender in Rick Behof, and Freund Sr. are set to appear at a May 10 court hearing, where formal pleas will be entered.