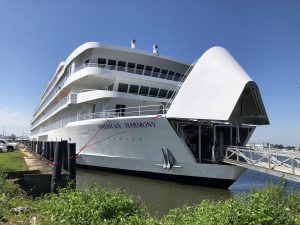 The City of Alton and American Cruise Lines have finalized a docking and promotions agreement designed to establish the Riverbend city at a key terminal for Mississippi River pleasure cruises.

Under the five-year agreement, four of American’s vessels — The Queen of the Mississippi, American Harmony, America and American Jazz — will have guaranteed docking privileges on the Alton Riverfront; including priority status for cruise line turnarounds.

In return the company will promote tourism and retail activity in Alton, according to the agreement.

The Guilford, CT-based small ship line currently offers a total of 35 river cruises, on the Mississippi, Columbia and Snake rivers; as well as along the New England and Alaskan seaboards.

America currently offers nine cruises along the Mississippi; docking variously in New Orleans, Memphis, St. Louis, and St. Paul, Minn. — as well as in Pittsburgh and Nashville by way of the Ohio or Cumberland rivers. The cruises last variously from five to 15 days.

Service to Alton is scheduled to begin next year, with a total of 11 cruises —increasing to 23 cruises in 2021.

American Cruise Lines will arrange tours of Alton for passenger, as well as provide them shuttle service to the town’s East Broadway shopping district.

Alton hotels will be used for passengers who need to stay overnight prior to boarding. That could be up to 80 percent of its embarking passengers, according to the company.

The river cruise deal is part of an overall plan to develop the Alton riverfront as a tourism destination, according to city officials.

Total economic impact for the city over the five-year agreement could reach $2.38 million, according to the Great Rivers & Routes Tourism Bureau.

Most then walked across Eads Bridge to join about 400 more at a larger rally on the Gateway Arch Grounds, in Downtown St. Louis.

The rallies were among more than 100 scheduled across the nation that day, to encourage grassroots lobbying for strengthened federal gun control legislation, as U.S. Senators returned home during an annual legislative recess.

The groups are seeking background checks on all gun sales and a strong, national Red Flag law – which would permit police or family members to petition a state court to order the temporary removal of firearms from a person who may present a danger to others or themselves. 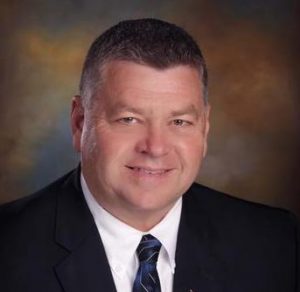 Silkwood, 59, is a Democrat. Before becoming mayor, he served as East Alton village treasurer for 16 years.

He cites among his accomplishments: working with local veterans to establish the East Alton American Legion Veteran’s Memorial Park and working a range of public and private entities to redevelop East Alton’s Eastgate Plaza Shopping Center.

Silkwood is a lifelong resident of East Alton where he has raised his three children.  He holds a master’s degree from Southern Illinois University Edwardsville in public administration and policy analysis.

Two Republicans — David Freiss of Red Bud and Kevin Schmidt of Millstadt — have announced plans to seek the 116th District seat in the Illinois House of Representatives.

The 116th District is currently represented by Democrat Nathan Reitz of Steeleville. Reitz was appointed to represent the district in May of this year; after Jerry Costello II, a Democrat from Smithton, vacated the seat to become director of law enforcement for the Illinois Department of Natural Resources.

Costello, who had represented this district since 2012, withstood a challenge from Friess in 2018; garnering 53.5 percent of the vote to Friess’ 46.5 percent.

Friess, an attorney with offices in Red Bud, is a member of Red Bud City Council. In 2011, he ran for Randolph County state’s attorney.

Schmidt, a chiropractor with practices in Millstadt and Freeburg, has no prior political experience but is active in community affairs.

Both describe themselves as conservative; anti-tax, pro-life, and pro-Second Amendment.

Freiss is a Chester native. Schmidt is originally from Belleville.

Both are married with two children.

County departments will receive $576,234.80 for demolition of derelict properties, weatherization programs, housing services and other programs.

The HOME partnership program provides formula grants that communities use – often in partnership with local nonprofit groups – to fund a wide range of activities including building, buying, and/or rehabilitating affordable housing for rent or homeownership, or providing direct rental assistance to low-income people.

The Madison County Mass Transit (MCT) Board of Trustees has formally proposed a budget and spending plan for the transit district’s 2019 fiscal year.

They are also available at the main office of Madison County Mass Transit at One Transit Way, Granite City, from 8  a.m. until 5 p.m., Monday through Friday.

A public hearing on a Tentative Operating Budget & Appropriation Ordinance is set for 9:00 a.m. on Thursday, Sept. 26, 2019 at the MCT offices.

Comments and questions can also be submitted by email, at managingdirector@mct.org, or by mail to Jerry Kane, managing director, One Transit Way, P.O. Box 7500, Granite City, IL,62040-7500

Both student members of the Southern Illinois University Board of Trustees will, beginning next year, have full voting rights, under the terms of legislation signed by Governor J.B. Pritzker last month at the university’s Edwardsville campus.

“Student voices matter. That, at its core, is why we’re amplifying the student voice on the Board of Trustees, offering each major campus equal say in board affairs no matter the date or time of year,” said Gov. Pritzker. “I’m so proud to sign into law this legislation that will give both campus’ student trustees the right to vote on every issue that affects those they represent. Today’s announcement and the rejuvenation of SIU makes me truly excited for the future of Illinois.”

The board is comprised of seven members appointed by the governor and two elected student trustees. However, under previous state law, voting privileges were rotated between the two student trustees; effectively giving student trustees only one vote, at any given time, on matters coming before the board.

The Illinois Department of Transportation announced that a bi-state partnership aimed at improving access and mobility throughout the Metro East has garnered top honors. The recognition from Midwest states in the American Association of State Highway and Transportation Officials is for critical bridge projects over the past decade that provide better connections in the metropolitan area with jobs and tourist destinations in downtown St. Louis.

“Working together, Illinois and Missouri have collaborated to make the Metro East an even better place to live, work and raise a family,” said Acting Illinois Transportation Secretary Omer Osman. “This honor highlights our commitment to finding multimodal solutions as we rebuild Illinois.”

The joint application from Illinois and Missouri was selected today as a winner in the “Quality of Life/Community Development, Large Project” category in the 2019 America’s Transportation Awards.

Between the Stan Musial Veterans Memorial Bridge project, the Park over the Highway at Gateway Arch Park, the Martin Luther King Bridge connection to Illinois 3 and the Poplar Street Bridge widening, IDOT and MoDOT have greatly enhanced freight, commuter, bicycle and pedestrian travel in the region. Congestion levels have been reduced, with improved overall safety for travel between Illinois and Missouri.

The projects also have provided key alternate routes during construction or incidents on Mississippi River bridges.

City of Edwardsville, home to Southern Illinois University Edwardsville, is ranked among the nation’s top 25 safest college towns by Safewise in its 2019 Safest College Towns list.

Ranked 21st nationally, Edwardsville was No. 2 in Illinois and ranked ahead of all Missouri college towns. Deerfield, home to Trinity International University, was tops in Illinois and No. 2 nationally. Naperville, which houses North Central College, came in at No. 22 overall.

“We commend the SIUE Police Department, as well as law enforcement agencies in and around Edwardsville for creating a safe environment where students can focus on learning,” said SIUE Chancellor Randy Pembrook. “

Since the Daily Beast ranked SIUE among the safest college campuses in the country in 2010, SIUE has consistently been rated highly for its safe campus environment by a variety of organizations, including the National Council for Home Safety and Security.