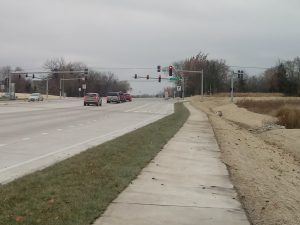 The intersection of Grass Lake Road and Route 45 at the western bypass, which officially opened Oct. 23. (Photo by Gregory Harutunian/for Chronicle Media)

The days of the “Millburn Strangler” and its legendary traffic snarls along Route 45 will soon pass into memory, as the western bypass is now open and steams toward its completion.

An Oct. 23 ceremony officially celebrated access to the nearly $31 million project which realigned two jagged “T” intersections, each with protected turn traffic signals, less than one city block apart. The final phases include landscaping and ancillary residential area road construction that will continue into the spring of 2020.

Discussions on the project began 25 years ago but gained traction in 2009, when a panel of county, state, and federal highway officials met to discuss 18 varied proposals for alternative roadways to alleviate vehicle congestion, sometimes miles long. It was later reduced to four plans with a western bypass, cited as Alternative No. 4, being selected due to the easiest applicability for viable easement acquisition and less complications for a dedicated pathway.

With the engineering phase completed in 2017, Phase III Construction began in earnest with the relocation of gas and electric utility lines. The four-lane bypass follows a 72,000-foot bell-shaped curve, from Country Place to Independence Boulevard, and skirts west of the original straight line along Route 45 that intersected with Millburn and Grass Lake roads. Contractor bidding began in April 2018, with Wauconda-based Berger Excavating, Inc. being awarded the job order for its submitted amount of $15.58 million.

Lake County is paying 100 percent of the construction cost and had committed $34 million in funding from its portion of the retail sales tax, set at one-quarter percent, which was made in 2011. Cost overruns are being paid by the state, which identified 31 parcels for easement acquisition. It technically became an IDOT project with acceptance of the construction bid.

“Ground landscaping like seeding, sodding, and prairie planting will be mostly complete by the end of the year. Remaining trees will be planted in 2020, and the landscaper is (Bensenville-based) Natural Creations, part of the construction contract with Berger Excavating, as a sub-contractor,” he said. “At a quick estimate, adding up the individual pay items related to ‘landscaping’ (is) around $1.4 million.”

Road alterations encompassed moving the intersection with Grass Lake Road south, from its original position at Route 45. Millburn Road is now a thoroughfare, with the demolition of a house and barn. The bypass also crosses other roads leading into nearby residential subdivisions.

“Grass Lake Road is now a cul-de-sac, and the name of the road is planned to be ‘Old Town Court,’” said Chuck Gleason, project manager for the Lake County Division of Transportation.

The Lake County Forest Preserve also sold a 13-acre parcel of the county-owned McDonald Woods to the state, rather than simply allow an easement for the project. The bypass will feature a paralleling bike path to its west and sidewalks along its eastern boundary that complements the Lindenhurst Grass Lake Road Bridge that borders the woods for pedestrian and bike use, as well as the county bike path.

While construction widened Route 45 to a four-lane highway, the existing former intersections will be designated as Old Route 45, and controlled by stop signs. The bypass intersection at Grass Lake Road has a traffic signal device. Stop signs will likewise control traffic at the Haven Lane access point in the Forest Trail subdivision, and Heritage Drive in the Heritage Trails subdivision. The northern section, from Independence Boulevard to Route 45 is 1,400 feet.

Gleason said, “Both LCDOT and the IDOT believe this improvement will substantially help the traffic demand for the next several decades.”