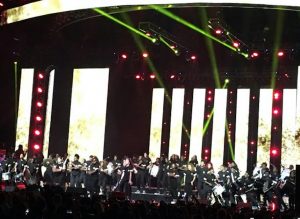 The Endure Dancers, a dance and drumlins group comprised of Students around Chicago, performs at WE Day May 8. (Photo by Bill Dwyer/for Chronicle Media

WE Day Illinois, “a celebration of young people committed to making a difference,” arrived at the Allstate Arena May 8 with rock-concert-like aural and visual explosions, much to the delight of the 15,000 middle school and high school students present.

The five-hour event was a mix of discussion, percussion and at times just plain old concussion, as an array of pop stars, actors and other celebrities regaled the young crowd with a relentless message of inclusiveness, hope and “you can do it” positivity.

WE Day is the brainchild of 30-something Canadian brothers Marc and Craig Kielburger, world class scholars who turned their talent and commitment to fostering youthful social awareness and personal empowerment needed to address the many pressing issues facing the world today.

Marc Kielburger is a Harvard University graduate and Rhodes Scholar. Craig Kielburger is the youngest ever graduate from the Kellogg-Schulich Executive MBA program. In their early 20s they co-authored “Me to We: Finding Meaning in a Material World,” which became the template for the WE Day movement.

Since its founding in 2008, WE Day has ballooned to a worldwide movement with annual celebrations in cities across America and around the world.

Over the 2017-18 school year more than 1.7 million students participated in WE programs, creating an estimated $138 million in benefit to nearly 9,800 local and global organizations and projects.

In Illinois last school year, some 850 school groups across the state participated in the We Schools program, volunteering 685,000 hours and raising more than $550,000 for local and global causes. 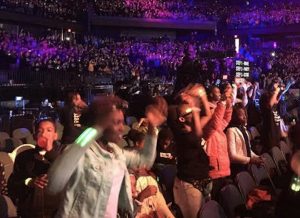 Students and teachers from Avalon Elementary School in Chicago react to the announcement that they won a $500 cash award for their school. (Photo by Bill Dwyer/for Chronicle Media)

The 2019 program singled out the west suburban Forest Park Middle School, which won last year’s top prize of $5,000 for its work on numerous initiatives to address need locally and in Honduras. On Wednesday more than half of the school’s enrollment — 158 students — sat on the main floor to enjoy the show and applaud this year’s list of honorees.

Throughout last week’s program various school projects were acknowledged and honored. As each honoree was announced, their supporters stomped and applauded in delight.

The message was, in a nutshell, not just that “you can do it,” but that you must do it, that change begins and moves forward with individuals. Doing good and being good, each speaker said in different ways, was the true cool, as well as the only real hope for a world awash in indifference, fear and unaddressed human needs.

While you’re at it, they told their young audience, take care of your own needs as well as others.

“You guys got energy?” Dready asked, his dreadlocks bouncing about wildly as he bopped and weaved and spun about the stage. “On your feet!” he urged, and the crowd erupted.

Of course, just what constituted a “highlight” wasn’t always clear to an aging journalist watching the proceedings. But the 12- to 17-year-olds present knew who was who, and erupted regularly as various speakers and performers were introduced.

One key point stressed over and over was the need to take care of oneself in order to be strong enough to help others. To that point, several accomplished people shared their own struggles with uncertainty, fear and emotional issues.

Actor and activist Kendrick Sampson, whose good looks and confident delivery suggested someone who had it all together, acknowledged that he struggles with emotional issues and anxiety.

“Taking care of our mental health is (often) demonized,” he said, adding “I go to therapy every week.”

“‘Vulnerable’ does not mean weak,” he said. “Look around you. We all feel apart at times. Discover what you need for your mental health and fight for others to have what they need.”

Author Elaine Welteroth, a former editor-in-chief of Teen Vogue, stood up on the stage confidently, stylishly dressed and accessorized. Don’t be fooled by appearances, she said.

“It’s OK to not always have a solution and know where to start,” she said. “Reach out.”

Welteroth said the key to attaining success lies not in being fearless, but in pushing through one’s fear, saying, “Don’t be fearless. Feel the fear and do it anyway. Be the possibility that you want to see.”

Tom Wilson, the CEO of event sponsor Allstate Insurance and WE Day National Co-chair, said he experienced uncertainty and numerous setbacks as he rose to leadership in the business world. But he didn’t allow the negatives to overwhelm the positive. The successful people he knew, Wilson said, “believe in their mission and believe in themselves.”

“You have that same passion and leadership. We need you to lead us to a better place,” Wilson said, concluding, “Let’s continue to dream together.”

Instead of only addressing students, Dr. Janice Jackson, the chief executive officer of Chicago Public Schools, spoke to the educators present, encouraging them to respect their students’ expression and resect their concerns.

“Listen to your students,” she counseled. “Great things happen when educators and students work together.”