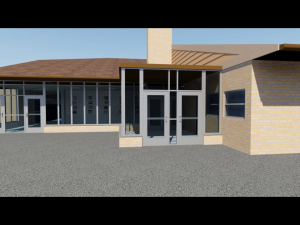 A virtual rendition of the Westfield School vestibule area, and enclosed area for a multi-purpose room, taken from the informational video on the district’s website (www.whsd1.org).

The Winthrop Harbor School District 1 is seeking voter approval for a $6 million bond request through a referendum question placed on the upcoming March 15 primary election ballot. The funding initiative will help make necessary repairs and upgrades to its Westfield and North Prairie facilities.

“The Westfield school is more than 50 years old, and will receive the bulk of the remedial work,” said Dist. 1 Superintendent Pam Goodwin. “North Prairie will also get work updating, but the main focus right now is to get accurate information to our community, so they can make an informed decision.”

The new bond offering will last 20 years, and comes on the heels of a building bond set to expire in three years. The retiring bond was issued to erect the North Prairie campus, and is presently in the “draw-down” stage. If successful, the new bond offering would be incorporated into the remaining bond amount with a pro-rated figure as a compensating factor.

“It’s so the school district portion of the community’s property taxes will not rise, and will stay at the current level,” said Goodwin. “It’s tiered for those three years, where the new funds would compensate for that period. The ‘draw-down’ duration is a receding amount. In effect, we’re asking the community to pay the same amount for the life of the new issue.

“Personally, I’m very supportive of this method and haven’t encountered opposition, for the most part.”

At Westfield School, located at 2309 9th St., the entrance courtyard is targeted for enclosure as a multi-purpose area for a lunch room, maintenance room, along with a pre- and post-class child care zone. Exterior drainage concerns are slated to re-vamping and landscaped away from the school entrance. One dozen furnaces, designed for residential applications and an inadequate source for heat, are tabbed for replacement.

situated at 500 North Ave., has plans calling for security measures with cameras and access locks, as well as new carpeting. Heating elements such as outmoded boilers are pegged for substitution with new units, roofing repairs, and exterior insulation removal with updated Dryvit material is in the mix.

The Wisconsin-based firm of Siemens, Inc. prepared the engineering report, and also created virtual tours with existing conditions and the remodeled proposals through videos on YouTube, and on the district’s website (www.whsd1.org) for viewing. The Smart Energy Design Assistance Center, which supplies monies for schools through the Illinois Efficiency Portfolio Standard, was likewise consulted for options.

“A building committee was convened specifically for the purpose of reviewing the assets of the two facilities, and they engaged the engineering firm to come up with a solution,” said Goodwin. “They identified what was required, so that these alterations would endure for future years.

“The wording of the referendum question and the resolution were approved by our board of education last December, after the recommendation came from committee,” she said. “It was forwarded to the county clerk’s office for approval.”

Lake County Clerk Carla Wyckoff confirmed the referendum question was certified for the primary ballot. “Once we receive the documents, there are statutory requirements which must be me. We ensure that the process adheres to those statutes. Further, it has to meet criteria set by the Illinois Board of Elections, which outlines procedures designated for school districts.”

“Notification that the referendum question has been accepted is then forwarded directly to the school district.

District 1’s bond entreaty mirrors a similar and successful approach taken by former Grant Community High School superintendent John Bennedetti, several years ago. In explaining that expansion and upgrade costs to the campus were affordable through a new bond, no tax increase was necessary by simply continuing the existing levy portion, of the assessed property taxes.

“We want to get the right information out there, and we want public input on this issue,” said Goodwin. “There is a public meeting scheduled for 6:30 p.m., March 3, at the Westfield School, where we can review the plans and the financial aspects with the community.”

A public hearing was also held Feb. 16, with the same goal on the agenda.