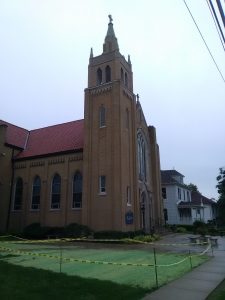 St. Peter’s, “a little country church, off the beaten path,” as the Rev. Anthony Rice referred to the church, has not had bell-ringing since the 1950s.

The massive bell now rings out every hour, on the hour, from the tower at St. Peter’s Catholic Church in Volo.

It is a sound that has not been heard since the late 1950s. Then, a severe storm tore through the area in 1960 and destroyed the cupola with its arches, spires to the four compass points and the large stone cross reminding one of the call to worship.

“This is surreal to hear this on Sundays, and on the hour … it’s very different from looking at pictures of the old tower and imagining what it must have been like,” said the Rev. Anthony Rice, church pastor. “I’ve been here for 10 years and saw the top of the tower, as it’s looked for more than a half-century, with the top shaved off and flat roof. I heard the stories from parishioners.”

“The neighbors like it. It’s a peaceful town and it’s not obtrusive,” he said of the bell. “The tone is very peaceful, ringing out for God.”

The bell was put back into service June 24, which also marked the 150th anniversary of the parish. A picnic was held, with more than 400 people attending.

The church’s location on Old Volo Village Road was actually a highpoint landmark on what was once the busy corridor of Route 120, until the southern bypass changed the traffic pattern.

Its history in the Volo area began in 1868, when the parish was established as a mission church for the rural community. German immigrant farmers had two family chapels in Johnsburg, and also traveled to the Volo site. The church and school were built in 1926.

“It’s a little country church, off the beaten path,” Rice said. “The school and the church were built at the same time. There was no debt as it was paid off. A lot of the parishioners helped build both of them, dragging stone to the site in their wagons and supplying the labor. The school closed around the late 1950s, but we still use the building for special events and activities. 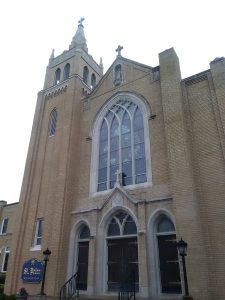 St. Peter’s Catholic Church in Volo marked its 150th anniversary with the restoration of its bell tower. (Photos by Gregory Harutunian)

Last fall, scaffolding went up 90 feet around the tower base and a restoration of the original elevation began. The bell, which had been placed on a ground display ever since the remaining 45 feet of the tower was dismantled, was sent to a burnishing shop in Indiana. The bell’s weathered patina was kept, although the hardware that provided its stability was manufactured.

It was returned to the church May 15, when the Most Rev. Joseph N. Perry, the auxiliary Bishop for the Archdiocese of Chicago, presided over a consecration ceremony in blessing the bell. The tower cap was rebuilt from the original church engineering blueprints. The restoration was overseen by the Chicago-based Berglund Construction Co.; and the bell’s placement back in the tower brought surprise reactions.

“We first rang it at 6 a.m., starting June 21,” Rice said. “A couple people came out, from inside the church, and just stood, listening to it … me too. It’s not a recording, but a real bell. Everything was done in advance and anticipation of the 150th anniversary. That was a great day, with the picnic, the weather was beautiful.”

“To have God as a presence in the area, for this many years, is amazing,” he said. “He blesses everybody in the area, Catholic or not.”