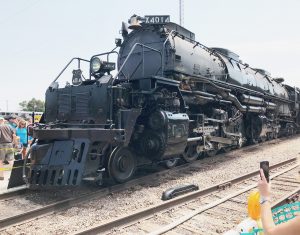 Big Boy No. 4014 rumbled into West Chicago June 28, giving hundreds of rail fans a chance to view the world’s largest steam engine. The 1.2-million-pound engine was decommissioned in 1959 but brought out of retirement and restored. Running through the region as part of a “Great Race Across the Midwest,” Big Boy’s next stop is Des Moines, Iowa. (Photo by Jack McCarthy/Chronicle Media)

For those people who have never experienced being around a steam-powered locomotive in their lifetime, — the whistle, the sounds — the best example is found in the movie, “The Polar Express.”

The 4104 Big Boy steam locomotive has a 135-foot length, with an additional 70 feet with the water car, can deliver 7,000 horsepower, and weighs 1.2 million pounds. It was one of 25 such engines commissioned in the 1940s to handle a steep run between Ogden, Utah and Cheyenne, Wyoming, with heavy loads during the war years. This particular engine was built in Schenectady, N.Y. in 1941, and has traveled more than 1 million miles, before it was de-commissioned in 1959.

The locomotive came lumbering out of the Butler Yards in Wauwatosa, Wisconsin July 26, following the Union Pacific train lines into Lake County, startling nearby vehicle traffic with its unique breathy whistle heading for a three-day layover at the Provo Training Center in West Chicago. By July 30, it would head to Geneva, Elburn, skirt around McHenry County, into DeKalb and Rochelle on its way to Iowa.

The reception at West Chicago was an unqualified success.

“We’ve received so many positive messages and comments on our social media, and people thanking our public safety department for their presence, it was amazing,” said Rosemary Mackey, the city’s marketing and communications specialist. “UP said there were 45,000 people viewing the display over the weekend, and many more looking from various vantage points.” 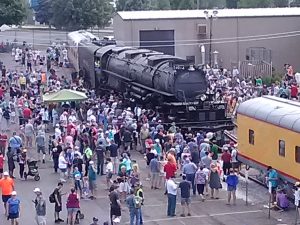 The display told how the engine was re-acquired by the Union Pacific in 2013, after sitting at a California train museum. A restoration effort was set in motion lasting more than two years, where the engine was completely dismantled with any salvageable and useable parts kept, then rebuilt and assembled with original and manufactured parts.

The unveiling in May coincided with the 150th anniversary of the Trans-Continental Railroad completion at Promontory Point, Utah. Dickens worked with a crew of nine, who are also along for the ride, every day. The cross-country starting point was the Union Pacific train yards in Cheyenne.

Dickens, also the engineer, explained that the train’s route came with much paperwork, restrictions on speed and track usage, and of course, what it’s like to drive No. 4104.

“You feel the engine. Looking out of the cab, you can see the reciprocation of the wheels, the dry rods, you hear it, feel it, smell it, and in some cases, taste it … it’s all run by the seat of your pants,” he said.

“There are brake gauges that you’re looking at, periodically. The water glass is a very critical gauge in the boiler, it shows you the amount of water in the boiler,” he said. “What we’re doing is creating steam power, so we’re using up that water, and we’re replacing it with the water in the tank at approximately the same rate the water is being consumed.”

The primary concern for Dickens, and the crew, on the trip, so far, is people lining the track route. “They want to get a closer look, take pictures, and we try to take it easy going places. Looking at this thing sitting here (in West Chicago), it looks pretty docile. But when it’s bearing down on you at 40 mph, and the mechanism is moving all these big heavy wheels, the whistle blowing … trust me, you’ll want to be back a little bit.”

Crowds lined the route, down from Wisconsin, to catch a glimpse of the restored locomotive, and the three-day West Chicago stopover near the Metra station produced a constant stream of people, all converging on one focal point: Big Boy No. 4104. From a bridge overpass, the scene partly resembled an 1860s Matthew Brady photograph.