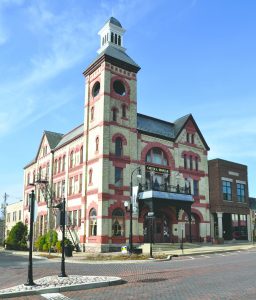 A proposal to install a high-definition projector and screen at the historic Woodstock Opera House, capable of pulling in live theater broadcasts from other countries, was advanced by the Woodstock City Council, during its Feb. 5 regular meeting. The unanimous 4-0 vote calls for a $13,945.44 outlay for the equipment, and opera house administrators hope the live performance broadcasts can be offered to patrons beginning in March of this year.

The new equipment will replace the current projection and screening system, which is inadequate for showing high-definition quality resolution video and audio. Funding by the municipality is being appropriated through the city’s Fiscal Year 2018-19 Capital Improvement Program budget.

Venue administrators have outlined their purpose as an opportunity to present a wider array of live arts performances from stages around the world.

In a letter to city council members, Daniel Campbell, the venue’s managing director, said, “We have entered into negotiations with a digital media distribution company, BY Entertainment, which represents National Theatre Live, which is an initiative operated by the Royal National Theatre in London. This service records and broadcasts live theatrical performances (as well as those of other theaters in the United Kingdom) to cinemas and theaters throughout the world.”

“The opera house was never set up to serve as a cinema or movie house, and as a result, has never invested in the type of industrial equipment that would normally be used in that medium,” he said. “Therefore, to proceed, the Opera House must pursue purchasing a new screen and a new projector. Working with Internet Technology Director, Dan McElmeel, the city has identified the products that will most effectively meet the needs to present this content at the lowest costs.”

“This is an opportunity to bring world-class artistry and culture to the area, something that would not normally be accessible outside this medium to our community and theater patrons, and in a state-of-the-art high-definition format,” said Holly Stika, the venue’s front house manager. “We have a projection screen but the required equipment to accommodate this project will give the opera house another facet for diverse event presentation.”

During a Jan. 15 Woodstock Opera House Advisory Commission meeting, Campbell related the proposal and the financial requirement needed for the equipment purchase to present the events. He also indicated researching the possibilities of expanding events such as the Folk Festival, Jazz Festival with a combination of Blues and Jazz, and Community Choir programming, along with creating a Podcast Festival. 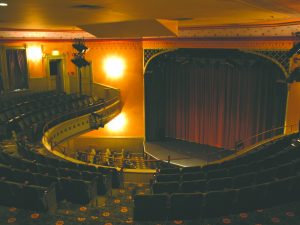 A 16:9 aspect ratio digital projection screen will soon be installed for lowering onto the opera house’s stage area. (Photo courtesy of the Woodstock Opera House)

Campbell also said that even moderate attendance could potentially recover the monetary outlay by the end of the year. The contract terms with BY Entertainment offer a “low-risk model” consisting of a 50/50 division of funds generated through ticket sales. In the letter to city council members, He also designated three contingencies for the endeavor.

“The first potential hurdle is establishing the ability to download very large media files through existing internet connections. With the implementation of the fiber project, this has proven to be a nonissue as the facility has a large pipeline of bandwidth at its disposal,” he said. “The second requirement involves purchasing proprietary software and hardware from the vendor to securely receive and store the copyrighted material, the costs … can be absorbed into (our) operating budget. The third and largest hurdle is having the caliber of equipment.”

Assistant City Manager and Finance Director, Paul Christensen, had identified that funding was available in the CIP revenues for the equipment purchase, and the city council’s approval for allocation signaled a next step for the historic live entertainment venue.

“This is very beneficial for the opera house and the community … and significantly offers exceptional programming going forward by utilizing the new technology,” said Woodstock City Manager Roscoe Stelford. “The National Theater Live is just a first step, and we do understand that with the size of the venue, we have to be open to taking advantage of these new technologies, not only for our residents but visitors to our community.

The Woodstock Opera House, located at 121 E. Van Buren St., was built in 1889 and stands in the historic downtown square, where it functions primarily for stage and musical concert productions.