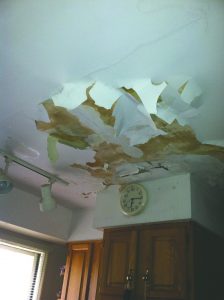 The kitchen ceiling has peeling paint and other debris, as part of the code violations listed the municipal court complaint. (Photo courtesy of the Crystal Lake Police Department)

While Andrew Freund and JoAnn Cunningham remain in custody on separate charges of murder and several other felonies, the fate of the Crystal Lake house where the couple allegedly killed 5-year-old AJ Freund and its eventual disposition has become a saga unto itself.

An Aug. 20 summary judgment will permit the holder of the mortgage to pursue a house sale, pending nonpayment of the outstanding amount, and the municipality is pressing its own litigation for demolition.

The 94 Dole Ave. two-story residence has not been occupied since April 24, when authorities removed the remaining evidence and arrested the pair, following Freund’s confession regarding the murder, concealment, and burial of the boy in a shallow grave. His body was found near a utility service road in a rural Woodstock farm field.

The Aug. 20 hearing presided over by McHenry County Circuit Court Judge Suzanne C. Mangiamele found in favor of the plaintiff, William Progar, a real estate investor, giving Freund and Cunningham until Nov. 20 to pay off the debt, as well as the accrued penalty and interest that is estimated to be upwards of $108,000. Progar had acquired the mortgage-holder status from Evanston-based Home Sites LLC.

The couple was present at the hearing, which was a continuance date from Aug. 8 where Cunningham had been allowed an extended time period to secure an attorney. Freund, himself an attorney, had previously acted as counsel for Cunningham. Prior litigation, undertaken more than one year ago by another redemptory party, was vacated successfully by Freund.

Meanwhile, the city of Crystal Lake continues its own civil lawsuit in county court seeking to level the house, due to its poor condition. The July 10 filing listed nearly two-dozen pages of detailed violations alone, within the 39-page complaint. A June 24 notice, sent by the city’s Building Department, gave the couple 15 days to comply with repairs, before the city sought a demolition order. The couple was served while incarcerated in the county jail.

David Pardys, of the Libertyville-based Swanson, Martin, and Bell LLP, is representing the municipality. When contacted, he said, “At this point, we are awaiting responses from the parties involved with the civil action. We are aware of the foreclosure action. There was an appraisal for the house with cost factors for repair, listed in the complaint.”

The interior and exterior repairs, according to the complaint, would require more than $100,000 to comply with municipal codes and ordinances. Coupled with the costs involved for potential demolition and accompanying fees, the resulting “as is” property value would amount to $11,000. Noted violations included masonry chimney repair, excessive mold levels, mice infestation, exposed electrical wiring, along with an accumulation of garbage and debris.

Other issues requiring attention or replacement were a leaking water heater, wall and ceiling repair, window replacement, roofing materials, along with missing gutters and downspouts. Crystal Lake police officers wrote about the dilapidated conditions in service call reports, and their contacts with the Illinois Department of Child and Family Services, dating back five years.

Also listed was “shower repair,” and in the search warrant affidavit forwarded by law enforcement, Freund related that the boy stood in the shower area, under cold water for a “period of time” because he soiled his pants. He was repeatedly beaten, and put to bed naked, wet, and with no blankets. The county coroner’s office said, “A finding of the cause of death as craniocerebral trauma … a consequence of multiple blunt force injuries.”

City crews have long since boarded up the windows and sealed the entrance on the house. Public Works Director Jim Magnuson had said his department maintains the exterior and cuts the grass “at the order of the building department.”

Should the foreclosure sale proceed, a third-party contractor would handle the arrangements for the bidding offers. It is unclear in what manner the city’s litigation would impact the sale. Pardys said, “A status hearing for the Crystal Lake complaint is set for Oct. 9 in McHenry County Circuit Court.”