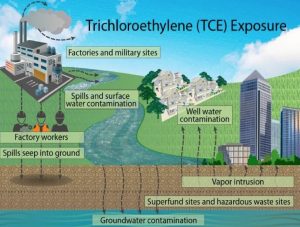 The graphic shows the cycle for TCE exposure, and was included in the court filing. (Photo courtesy of Romanucci & Blandin)

More than five years ago, Arnold Magnetic Engineering, Inc. and 300 West LLC in Marengo were named in civil litigation filed by the Illinois Attorney General to enforce compliance with Illinois Environmental Protection Agency guidelines and stipulations for on-site and off-site well testing.

Trichloroethylene (TCE) and Tetrachloroethylene (PCE), both listed as Group 1 Level carcinogens, along with other Volatile Organic Compounds used in their production methods had seeped into the water table, spreading across Railroad Street and Ritz Road.

The chemicals resulted in the contamination of commercial and residential wells in that area. Their presence was verified through independent analysis with a strict chain of handling. Negotiations forced the defendants to fund a municipal water line along Railroad Street, along with acquiescing to other considerations. Although the court proceedings continue, damages and compensation have not been resolved. The potential physical effects also have not been determined and remain unknown.

Almost four miles away in Union, four companies have been cited in an Oct. 1 complaint for the use of the same chemicals as degreasing agents and in production methods alleging they, “knowingly and recklessly emitted pollutants over the last five decades including a mixture of Volatile Organic Compounds (including but not limited to TCE and PCE) and Ammonia. These VOCs and Ammonia have recklessly been released into surrounding groundwater, air, and soil.”

The plaintiff, Dana Harper, lived “mere feet” from the facilities for more than 25 years, and the “consistent combinations of emissions in extremely close proximity … caused (her) to be diagnosed with Stage IV non-Hodgkin lymphoma on Oct. 3, 2017.” The lawsuit noted that the Evergreen Academy School, a magnet school for sixth- through 12th-grade students, is also “mere feet from these facilities.”

Michael Grieco, an associate attorney with Chicago-based Romanucci & Blandin, LLC, said, “TCE, PCE, and other Level 1 carcinogens are known to cause cancers such as non-Hodgkin lymphoma, liver cancer, kidney cancer, and other tumors. Often times, these forms of cancer have a long latency period, even after the last contact with these carcinogens. Union residents, such as Dana Harper, were exposed for decades to the contaminated water on a daily basis.

“They inhaled (and drank) the carcinogens. Ms. Harper’s home was less than 600 feet (away). TCE fumes and vapors have up to a 1.5-mile radius.” 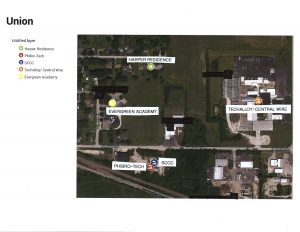 The aerial location map shows the four industry sites along Jefferson Street in Union, in proximity to the plaintiff’s residence. (Photo courtesy of Romanucci & Blandin)

The defendants are Central Wire Inc., Techalloy Company Inc., Phibro-Tech Inc., and Southern California Chemical Company Inc., and are all congregated along Jefferson Street in Union. The complaint alleges that each entity “violated disposal protocol and have emitted TCE and PCE in unreasonable and ultra-hazardous quantities in areas surrounding their plants … migrating through ground, air, and water.”

In January 1985, a raw water mineral analysis of the village’s Well No. 3 showed a significant increase in the chloride concentration, and subsequently, another well was dug at a deeper depth.

The lawsuit outlines historical data regarding the four companies and their practices which allegedly led to the contamination of drinking water in community and private wells, emitted carcinogenic toxins into the air, took no precautions or remedial steps, and gave no public notice to the potential dangers that had developed.

Examples listed in the 63-page court filing were manifold. Studies in 1990 and 1991 that found the groundwater under the Central Wire property, acquired from Techalloy, was contaminated by the chlorides. Samples drawn from 17 nearby private wells identified six wells to be contaminated by VOCs.

Southern California Chemical Company was cited in June 1975 for an ammonia storage tank valve gasket rupture, and the periodic escape of ammonia vapors. By Nov. 1975, the county state’s attorney issued a “plea to the IEPA asking that they revoke the permit that was granted to SCCC for (a) landfill … (and) stated their office had ‘filed a lawsuit against (SCCC) because of (the IEPA’s) ineptitude … ignoring the fact that they have had odors and spillage and have violated E.P.A. regulations.’”

In an email, Kim Biggs, public information officer for the IEPA, said, “We have no comment at this time, and cannot comment on pending litigation.”

The law firm issued a statement, saying, in part: “As the lawsuit details, multiple tests throughout the 1990s found unsafe levels of contaminants in groundwater beneath the plant, in soil, and in groundwater wells of nearby residential homes. In addition, TCE was federally recognized as an air pollutant as early as 1970, and added to the EPA’s hazardous substance list in 1976.”

Harper was quoted, as saying, “Central Wire put me into the direct zone of danger through improper handling of ultra-hazardous material. The company should have exercised reasonable care to protect my health and the health of my community. They can never give me back my health, but these dangerous actors must clean up their mess and to operate with human compassion and respect going forward.”

The plaintiff has asked for a trial by jury, and a scheduling conference is set for Dec. 31 at the county courthouse in Woodstock.

A request for comment from Central Wire Inc. was not returned.