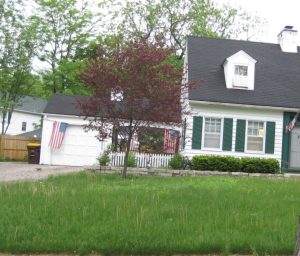 The Freund house at 94 S. Dole Avenue in Crystal Lake, as it appeared in April, prior to investigators searching the site. (Photo courtesy of the Crystal Lake Police Department)

The Crystal Lake City Council voted unanimously to accept a bid that will raze the 94 S. Dole Ave. house where 5-year-old AJ Freund was murdered, and a separate bid to remove hazardous material and asbestos prior to the demolition, during its Jan. 7 regular meeting.

The building, shuttered since May, was also part of dual litigation, one by the mortgage holder for foreclosure and possession, and the other by the city itself in seeking remediation for code violations.

Chicago-based Green Demolition Contractors, Inc. was awarded the contract to tear down the house, remove the materials, and landscape the grounds. Six bids were received for the job order, and the Chicago company was selected by offering to donate their services at no charge. A nominal contract for $10 was tendered with both parties agreeing to the conditions. The actual demolition is expected to be started and completed within a three-day period.

“The vote by the city council was a unanimous 7-0 vote to accept their bid, and there were six other bids that were opened,” said Michelle Renzsch, the city’s community development manager. “We’re looking forward to all of this work being completed within one month, and the actual demolition was said to take three days all together.”

Before the demolition work commences, the Markham firm of Environmental Cleansing Corp. was engaged through a $5,500 contract, also approved by the city council, to remove asbestos material from the bathroom and basement that was discovered by city inspectors while conducting a survey of the building.

The inspection led to a July 10 complaint, filed by the city with the McHenry County Circuit Court, seeking demolition of the structure, due to numerous municipal code violations, cost factors for damage and neglect remediation, along with the potential future use of the site as a single-family residence. The 39-page document listed nearly two-dozen pages of detailed violations and the contention of the remedial work being too costly. A county circuit court judge sided with the city last month, and allowed the demolition to proceed.

Also at issue was an Aug. 20 civil suit hearing, presided over by McHenry County Circuit Court Judge Suzanne C. Mangiamele, which found in favor of the plaintiff, William Progar, a real estate investor that gave the owners, Andrew Freund and JoAnn Cunningham, until Nov. 20 to pay off the debt, as well as the accrued penalty and interest that was estimated to be upwards of $108,000. Progar had acquired the mortgage-holder status from Evanston-based Home Sites LLC.

“At this point, we don’t own the property but the current ownership has seemingly walked away, and the city was allowed through the court for the demolition,” said Renzsch.

“Once the remediation is complete, the parcel will be up for sale and ripe for a new family and a new residence. We’ve had a lot of public input on the property, where some want to see the building demolished, and some that want it turned into a park,” she said. “The city is also being receptive to the neighbors, who would prefer another home and another family in its place … everyone just simply wants to move on.”

The site became the epicenter of a missing child search in April, when Freund and Cunningham reported that 5-year-old AJ Freund Jr. could not be found. It was later determined that something more nefarious had taken place, when K-9 units indicated the child did not leave the premises “on foot.”

The child was found April 24 in a shallow grave, wrapped in plastic, on a service road near rural Woodstock. Authorities were led there through a confession by Andrew Freund. In a search warrant affidavit, Freund related that the boy was made to stand in a cold shower for a “period of time” because he soiled his pants. He was repeatedly beaten, and put to bed naked, wet, and with no blankets.

Both parents, Freund and Cunningham were arraigned on murder charges, while Freund was also charged with concealment of a body and several other felonies. Cunningham, 36, pleaded guilty to first degree murder, during a Dec. 5 hearing, and faces up to 60 years in prison, and a sentencing hearing has yet to be scheduled. Freund has pleaded not guilty and has a Jan. 14 court hearing.