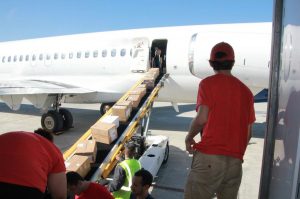 When 32-year-old Ryan Gergen isn’t working full-time as IT Director at Weber Flavors in Wheeling, or being Dad to 19-month-old daughter, Audrey, with his wife Samantha, he’s responding to people in crisis through Hope Heroes NFP.

“We aim to lift victims up from their emergencies and guide them through the recovery process from start to finish,” Gergen said.

Since its inception, Hope Heroes raised more than $100,000 in relief funds and more in donated food, water supplies, clothing, transportation, and medical supplies.

On Dec. 10, Hope Heroes partnered with Warrior Angels and Carnegie Mellon University Student’s Humanitarian Mission to Puerto Rico, to charter a MD-83 airliner jet to take 30,000 pounds of supplies to Puerto Rico and return with 130 people whose medical needs or disabilities prevent them from flying to the mainland without special accommodations or medical support.

“The evacuation wait list grows daily because most hospitals on the island still cannot meet the needs of the communities they serve,” according to Valerie Edmondson Bolaños, from Warrior Angels Rescue. “We are launching a Sister Hospital Program to bring medical care and supplies back to the island, but there are people who will not survive if they do not get to a hospital in the meantime.”

Said Rosana Guernica from CMU, “Combined, these three teams evacuated nearly 600 patients by air, and sent 163,000 pounds of relief aid to the island.”

What is most amazing to Gergen is how complete strangers band together to provide aid in times of crisis.

“In such catastrophic times we have unified together as small groups, partnering to create our own solutions, to benefit a greater cause,” he said. Hope Heroes also plans a mission to Marovas where there are over 100 bedridden people that have just begun to receive relief from hurricane Maria.

According to Gergen, “When other organizations fall short we will be there to help victims recover.”

His aim is to provide strong community rebuilding through long-term sustainability.

On Dec. 6, the Rev. John Zayas, pastor from Grace & Peace Church in Chicago donated a 100,000-square foot warehouse full of supplies that the members collected. The donations included new clothing, bottles of water, and other supplies filling over 210 pallets ready for shipment. The Salvation Army will help Gergen distribute the donations to different areas of Puerto Rico.

Gergen credits his background in IT to his networking success.

“The website marketing got sponsored by Google at $10,000 a month,” he said. “The first thing I thought was what do millennials do?”

He went on to explain his generation donates to causes rather than organizations.

“So, we made cause-focused marketing,” he said.

Hope Heroes’ first project was with victims of hurricane Harvey.

“Once we got our 5013C, things started to change,” said Gergen. “We raised over $70,000 for Southern Springs First Baptist Church victims.”

Hope Heroes will hire a contractor to build wheelchair ramps for the shooting victims who will be returning home in wheelchairs. “Our organization directly funds the needs of victims. We can fill a void that the other charities cannot.”

Hope Heroes biggest challenge is keeping up with their growth.

Volunteer, Shauntae Lewis, in Florida does the fundraising campaigns. She committed to three years of service to the organization. Another program, spearheaded by Jill Jacobs is specifically for people with disabilities and the elderly. She helps people get evacuated who need special equipment or supplies to make a move possible.

“We are a digital organization. We do Zoom meeting, text, WhatsApp, Skype, Facebook, and phone calls to meet with each other and to communicate to the world,” said Gergen.

Gergen partners with universities for statistical analysis to determine where and what the needs are. That way the most appropriate supplies get to the right place in a timely manner. Funds are raised by word of mouth and social networking.

“On-line is how millennials experience the world,” Gergen said.

Gergen negotiates with suppliers for the best price possible so that more money can go to the victims of disasters.

“There’s a lot of need out there,” said Gergen. “I’m partnering with people I’d never even thought possible. All so that we can help people.”

He’s amazed at the generosity of people as one catastrophe piles on top of another.

“I really hope that everyone begins to see that people need help, no matter who they are or where they are. We need to stop talking so much about differences and just get things done,” said Gergen.

—- Hope Heroes comes to aid of victims of disasters   —-