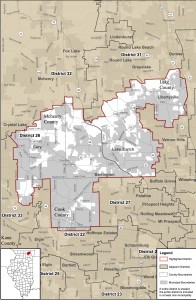 A national legislative expert, an area village president and the brother of a Chicago Bear legend all have their eyes cast on being a state senator.

Dan McConchie, Martin McLaughlin and Casey Urlacher are each campaigning to be the Republican nominee to replace Dan Duffy (R-Lake Barrington), who is not seeking re-election to his 26th District state Senate seat. The three Republican candidates are hoping to be the party’s choice in the March 15 primary.

McConchie of Hawthorne Woods works to advance conservative principles in state legislatures across the country as a national legislative expert. He spent nine years in the infantry and military police with the Illinois National Guard. He works in states across the county to expand legal protections both at the beginning and end of life and to help curb sex trafficking. In 2007, McConchie was in a hit-and-run accident in Mundelein while riding a motorcycle that left him with a spinal cord injury and requires him to use a wheelchair for mobility.

McLaughlin is the village president of Barrington Hills. He also is a small-business owner and a financial expert who says he is running to bring his common sense private sector experience to Springfield. He was elected village president in 2013, defeating a two-term incumbent despite being outspent 5-to-1. The owner and manager of a registered investment advisory firm for many years, McLaughlin has overseen the investment of both public and private pension assets. He is a named fiduciary on police, fire and municipal pension plans.

Urlacher is the brother of former Chicago Bear star Brian Urlacher. After graduating from Lake Forest College with a degree in business, Casey Urlacher played professional football on several teams, including in Chicago and Nashville. When he retired from professional sports, he partnered in several entertainment venues in Chicago, developed and managed investments in real estate and is director of business development for a construction company. He lives in Mettawa, where he serves as the unpaid mayor. He also serves on the Illinois Civil Service Commission.

McLaughlin said growing businesses, freezing property taxes and stopping a retirement tax would be his priorities as a state senator.

“We need to make Illinois business-friendly again so that current businesses remain and thrive, we attract new businesses to Illinois and so that entrepreneurs begin new successful ventures within state lines,” McLaughlin said.

He said that because Illinois homeowners are required to pay an amount in property taxes that, in their lifetime, will eclipse the value of their home he supports a property tax freeze.

McLaughlin also said he will fight any retirement tax sought for seniors.

“We cannot solve our state budget problems on the backs of our seniors, as this will only serve to accelerate the departure of retirees from Illinois,” he said.

“Our financial house is collapsing because it is built on a weak foundation,” Urlacher said. “Reforming mandates, entitlements, pensions and our property tax system are fundamental to turning the future and fortunes of Illinois around. As long as the governor’s policy agenda is reasonable, fair and in the best interests of the people of the 26th District, he can count on my vote in the Legislature.”

He said that he supports term limits and vowed, if elected, to not serve more than 10 years.

Urlacher said he does not support any increase in the state income tax or sales tax. He also frowns on any proposed retirement income tax.

“Illinois is losing population in droves,” Urlacher said. “Raising taxes will only make Illinois a less attractive place to live and work than it already is and will only make our financial problems worse.”

McConchie said revamping the state’s pension system has to be our focus.

He said politicians raided the state’s transportation funds for too long and now our roads are falling apart because of it. McConchie said it is time to protect those funds so roads can be repaired and new roads built.

McConchie said the state needs to be like every Illinois family and live within its means.

“In order to get to a balanced budget and reverse the trend of people moving out of state, we must reduce spending across the board, cut the existing tax burden and freeze property taxes, and remove unfunded mandates and onerous state procurement rules on local governments that help drive up local property tax costs.

Why are you running for state Senate?

Urlacher: I am running for the state Senate because I deeply believe in giving back to my community. Public service is an honorable cause and I have enjoyed it greatly as mayor of Mettawa. Now I look forward to the opportunity to bring my conservative credentials to Springfield where it is so clear that they need new fresh leadership.

McConchie: Big government has failed in Illinois. It’s time to follow the lead of our neighboring states and make Illinois competitive again. We must reform state purchasing practices to provide for greater competition and transparency driving down costs. We must block efforts to impose new taxes, such as a tax on senior income or a service tax.

McLaughlin: It has been frustrating to watch Springfield grind to a halt because of an inability to accept needed spending reforms and enact a balanced budget. Meanwhile, as president of the village of Barrington Hills, we’ve been able to work through our differences to cut spending and taxes. It can be done, but you need strong, experienced leadership to make it happen.