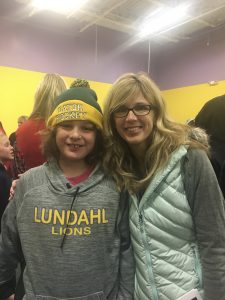 Carolyn Schofield and her family’s Thanksgiving Day tradition starts with helping the hungry of McHenry County.

For the past 10 years, Schofield and her husband, Steve, and three children, Griffin (17,) Mary Claire (14,) and Nolan (12,) volunteer at the Community Harvest.

“Nolan was just a toddler in a stroller when we began volunteering,” said Schofield.

The donation center was abuzz with activity as hundreds of volunteers assembled and filled boxes, weighed food, received last-day donations, drove trucks, and helped with cleanup.

Started in 1982, the Crystal Lake Food Pantry, 42 East St., provides food assistance and hope to families in Crystal Lake and McHenry County. The Food Pantry also provides Mobile Food Trucks and personal delivery of much-needed food to those who can’t come to either of its locations. 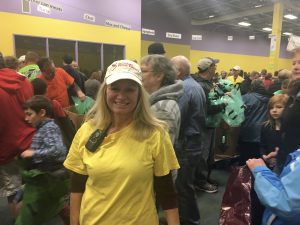 “Crystal Lake Central Mentors came to sort food to make sure that food that would expire within 3-6 months would get on the shelves first,” she said.

Big Brothers Big Sisters, Crystal Lake South Lacrosse Team, and Alexander Lee Center for Autism students are among the groups that come in the week before the Community Harvest to prepare the space.

As in the past, the Crystal Lake Library held their “fine amnesty” drive. They brought in more than $7,000, which translates to $56,000 worth of food.

Pelinski said that each dollar buys $8 worth of food. 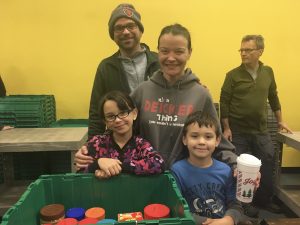 Last fall, the generous people in the Crystal Lake area donated 66,842 pounds of food and $46,480 in funds, during the Community Harvest drive.

“It’s incredible, the whole community gets involved,” said Pelinski. “And not just for today, the entire month of November.”

She added that not all the volunteers are from the Crystal Lake area, they come from beyond McHenry County.

“We have volunteers that come from Chicago after hearing about the event through the grapevine.”

The parking lot of Hobby Lobby provided evidence of Pelinski’s statement. It was packed to a “Black Friday” capacity with volunteers donating, sorting, and carrying nonperishable food items. 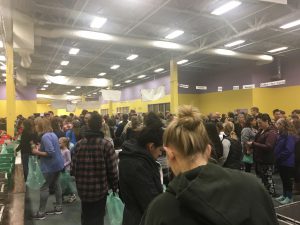 The early years of their service began by simply collecting food for the drive. Three years ago, they started volunteering on Thanksgiving Day morning. “It’s the best way to start Thanksgiving,” said Sturgis. Emily added “I like helping out humanity.”

When discussing issues related to hunger and hunger awareness, the term “food insecurity” is commonly used. Food insecurity refers to household members having limited or uncertain access to adequate food due to insufficient money or other resources for food. In McHenry county, that means 8.8 percent of the population, or 27,000 people live with food insecurity. To put that number into perspective, that’s equivalent to somewhere near the entire population of Huntley or Algonquin.

Food insecure households are faced with having to make the difficult decision between buying food or paying their rent or mortgage, utility bills, car payment and/or medical bills. There are various reasons households need the assistance of the Food Pantry, including disabled persons with limited access to food, job loss, single parent households and limited senior income. More than 77 percent of food insecure families are part of the working poor.

Monetary donations go a long way to help the Food Pantry to be a continued resource to their clients, many of whom may only need the help for a month or so while getting back on their feet. Food and monetary donations for the Pantry are gratefully accepted all year long — not just during Community Harvest season! Donations are tax deductible, and can be made online at clfoodpantry.org.

The donations from Community Harvest can last the Food Bank until August. The Food Bank accepts donations throughout the year because, as those who suffer from food insecurity know “Hunger doesn’t take a summer vacation.”