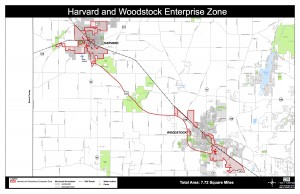 A plat map of the enterprise zone created by the cities of Harvard and Woodstock, along with McHenry County that was put into effect in January 2016, with approval by the Illinois Department of Commerce and Economic Opportunity.

Woodstock officials have indicated that a state-approved enterprise zone is drawing interest from businesses to a 7.72-square-mile perimeter along the commercial corridors on routes 14 and 47. The district was created in partnership with the city of Harvard and McHenry County to spur economic development through tax incentives, and took effect nearly three months ago.

“There is nothing that we can announce right now, but there has been interest,” said Woodstock city manager Roscoe Stelford. “The city’s Economic Development Department is currently talking with businesses while following a line of recruitment and expansion of their operations. It’s an opportunity for economic stimulation, and the zone is designed for that purpose.”

The state’s Enterprise Zone Program was formed to jumpstart growth in economically depressed areas through expiation to businesses, qualifying them for possible local and state tax incentives, along with relaxed regulations. Woodstock’s building and zoning director Joe Napolitano completed the application in Dec. 2014, through the Illinois Department of Commerce and Economic Opportunity.

“They had to review the details, and use a scoring system in their determination … we didn’t hear anything until August of last year,” said Napolitano. “We’ve had several businesses approach us and request applications. One of the benefits to a commercial entity is an exemption on sales tax for building materials on new construction.

“This is in effect for 15 years, and another review process can extend the period for an additional 10 years,” he said. There are approximately 97 enterprise zones statewide, with 45 of them, set to expire and coming open to new areas. One criteria is the size cannot exceed 13 square miles, which allows us to expand. Weaving the partnership with Harvard and McHenry County is a boon to us all.”

Charlie Eldridge, the zone’s Governing Board Administrator, worked in conjunction with Napolitano on creating the union and completing the application process. He cited his motivating reasons as rooted in providing a boon to county residents through a shifted property tax burden and potentially shortened commute times for job commitments.

“It’s no secret that county residents pay almost 80 percent of the tax base in collected funds,” he said. “By comparison, Lake County residents pay around a 60 per cent share, largely because of the commercial entities there. By attracting more businesses to the zone areas, it can lower the tax burden on residents.

“There’s another major benefit. McHenry County has the sixth highest job commute in terms of times and distances, in the nation. Attracting businesses brings quality jobs, and employment closer to home. It’s a quality of life issue. I have to credit Sen. Pam Althoff (R-McHenry) for suggesting we attend the meeting about the opportunities for an enterprise zone. Cooperation between the three governments was essential to gaining approval.”

The zone extends through unincorporated McHenry County, and into Harvard. The municipality sought to include its own commercial corridors on routes 14 and 173, and the former Motorola site.

“The opportunities for businesses to come to depressed areas, and the benefits created for them, in turn creates jobs for the people who live here,” said David Nelson, Harvard’s city manager. “We targeted our industrial park at the west end of town, and more importantly, the Motorola site. The Harvard Economic Development Corporation is a private group of volunteers, and they forwarded the idea.

“They made the connections and realized the best interests of everyone would be served together.”

The state exclusively initiated the enterprise zone program in the late 1980s, with involvement by the Illinois Department of Revenue, to create a growth program for industry. Special taxing districts and different designations were offered to communities as an economic tool.

Potential inducements to businesses include reduced permit fees, rebates on tax liabilities for equipment purchases, real estate tax abatements for new plant construction or expansion, as well as tax incentives for relocation to the specified site.

“This is unique for three governmental bodies to join together in this kind of economic effort,” said Napolitano. “Being able to offer our project to prospective businesses is the important part of the package.”