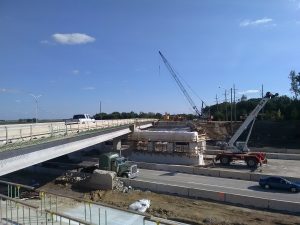 The widening of Route 23, was completed in 2017, and the entire interchange is now slated for a 2020 completion date. (Photo by Gregory Harutunian/for Chronicle Media)

The Marengo City Council accepted a proposal from the Nortillo Consulting Group to complete and file the necessary amendment application that could lead to attaching the municipality with an existing enterprise zone, during its May 28 meeting.

The 6-2 approval vote accepted the firm of Teresa Nortillo, the city’s economic development consultant, with a low bid of $10,000 plus additional research expenses, and was one of the three bids entered for the job order.

Council discussions on joining the enterprise zone began last year, and have been steadily progressing. Substantively, inclusion would present economic advantages in the form of tax incentives for businesses relocating to the districted areas, or expanding their current facilities. The zone, established in 2014, encompasses a boundary area with portions of unincorporated McHenry County along Route 14, along with Harvard and Woodstock.

Marengo City Administrator Josh Blakemore said, “The actual map of sites, those areas are still under discussion. We are focusing on the Route 23/I-90 Interchange area. The enterprise zone is a good tool for economic growth and marketing for development options, while providing local incentives. No public hearing date has been set, and the process will go on through the summer.”

The application adds a new unit of government that requires the following steps: a public hearing, passing and amending designation (site) ordinances, amending the current zone’s intergovernmental agreement, and filing the application. The zone is administered through the Illinois Department of Commerce and Economic Opportunity, and “designed to stimulate economic growth and neighborhood revitalization in economically depressed areas,” according to its website.”

The Route 23/I-90 Interchange is of strategic importance to McHenry County, being its only ingress and egress point to the Jane Addams Tollway. County officials had placed the project on the wish list for more than a decade, before funding and efforts led to the county board’s Transportation Committee approving a memorandum of understanding by a 6-1 vote in August 2016. An open house held at the Marengo City Hall one year later, displayed artist renderings for the completed project with on- and off-ramp exits, roundabouts, and widened overpass lanes.

The city had also been steadily annexing properties from the interchange site into the municipal boundaries following a contiguous jigsaw pattern eying the interchange location for commercial and light industrial development.

“The zone benefitting the western portion of the county means looking at the interchange is a good place to start,” said Charlie Eldredge, the enterprise zone’s administrator. “Marengo’s districting creation … if they can get utilities at the interchange, then there’s a very good opportunity for economic development in that area.”

Eldredge had also submitted a bid for the amendment application of a $25,000 estimate plus contingency costs, as did The Development Corporation with an estimate of $15,000 to review the application, $50,000 to file and complete the application, and undetermined amount for additional research expenses.

“In order for Marengo to join the enterprise zone, the three governmental entities of Harvard, Woodstock, and McHenry County would have to approve their membership through an amended intergovernmental agreement,” Eldredge said. “As far as a time frame, the local governments could agree to the amended zone in as soon as two months, however the problem is that the state of Illinois has been very slow in approving enterprise zone amendments, due to short staffing. If more personnel are hired, then the period would be less lengthy.”

In council documents, Blakemore noted that $35,000 was included in the Fiscal Year 2019-20 budget for the zone. In addition to the approved $15,000 application costs, Marengo’s expected annual contribution would be no more than $20,000 toward its operation. He also noted that Woodstock and Harvard currently contribute a combined $40,000 annually.

Eldredge said, “The contribution amounts go toward the operations of the zone including things like my salary as administrator, website maintenance and accesses, attending meetings, and visiting business owners that could benefit from becoming part of the program. The tax incentives come from the state.”

With Marengo’s inclusion, the enterprise zone’s boundaries would expand, from a 12-square-mile perimeter to 15 square miles.

The Route 23/I-90 Interchange is now expected to be completed by 2020, as weather conditions have hampered construction and the expected fall completion date.