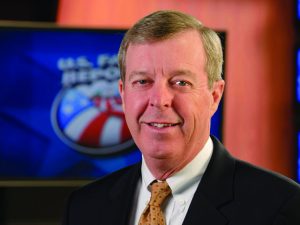 John Phipps, will be the main speaker at the McLean County Chamber’s Agriculture Awareness Breakfast in March. (Photo courtesy of Agweb.com)

The McLean County Chamber of Commerce will celebrate and show support for agriculture education and the advancement of the local agriculture community during the Chamber’s Agriculture Awareness Breakfast on Wednesday, March 20 at the Chateau Hotel & Conference Center in Bloomington.

A keynote presentation will be given by John Phipps, a commentator for U.S. Farm Report.

U.S. Farm Report airs weekly on Saturday and/or Sunday, and is hosted by Tyne Morgan, with exclusive on-farm insights from Phipps.

He was born in 1948 and raised on a six-generation farm in east-central Illinois. He graduated with honors from Rose-Hulman Institute of Technology in 1970 with a bachelor’s in chemical engineering and a minor in economics.

The next five years were spent as a nuclear engineering officer aboard the USS Seahorse, a fast-attack submarine home-ported in Charleston, S.C.

During this time, he married Jan Sonneveldt from Grand Rapids, Mich. They have two sons —Aaron, a mining engineer who returned to the farm in 2008, and Jack, a project director for U.S. Cellular in Chicago.

Phipps returned to his family’s 600-acre farm in 1975. The farm now comprises 2,140 acres in Edgar County. At various times, he has sold computers and software to farmers, worked in a mortgage banking operation as a closing officer, and taught at the Danville Area Community College.

Phipps is a 1988 graduate of the Illinois Agricultural Leadership Program. He is active in the United Methodist Church, serving as a certified lay speaker and choir director.

He writes humor and commentary, appearing regularly in Farm Journal and Top Producer magazines as a contributing editor. His work has also been published in Farm & Country in Canada, Produktion in Denmark and The American Enterprise.

In 2004, Phipps was named Writer of the Year of the American Agricultural Editors Association He also appeared regularly on Weekend Marketplace as a commentator.

In 2005, he assumed the position of host of U.S. Farm Report, the nation’s longest-running TV show, stepping down from the position in 2014 to spend more time on the farm. Also in 2005, he began “Incoming,” a unique weblog for those who farm and those who like farms.

To register for the breakfast, go to http://members.mcleancochamber.org/events.