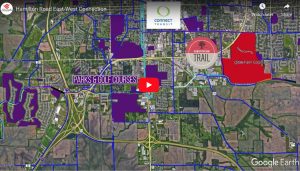 The City of Bloomington is applying for $5.425 million in federal funds for the connection between Hamilton Road, from Bunn Street to Morrissey Drive, through the Better Utilizing Investments to Leverage Development (BUILD) Discretionary Grant program, administered by the United States Department of Transportation (USDOT).

If awarded, the city would match the grant with $2.325 million in local funds to cover the $7.75 million project cost.
The Hamilton Connection project represents the final connection of a 7.2-mile east-west transportation improvement along the south portion of Bloomington on Hamilton Road and a merging west-side street called Fox Creek Road.

This final Hamilton Connection comprises 3,000 linear feet of new roadway and a shared-use path, from Bunn Street to Commerce Parkway, plus widening of Hamilton from Commerce to Morrissey Drive along approximately 1,000 linear feet of Hamilton Road east of the new street section.
A 10-foot wide shared-use path construction included as part of this project will close a gap that will connect a 7.2-mile section of the 45-mile network of the Constitution Trail.

Designers are paying close attention to the construction details necessary for this shared-use path in close proximity to the roadway.
The USDOT will announce award recipients by Sept. 15.
BUILD provides a unique opportunity for the USDOT to invest in road, rail, transit and port projects that promise to achieve national objectives.

Previously known as Transportation Investment Generating Economic Recovery, or TIGER Discretionary Grants, Congress has dedicated nearly $7.9 billion for eleven rounds of National Infrastructure Investments to fund projects that have a significant local or regional impact. Since 2009, the program has provided a combined $7.9 billion to 609 projects in all 50 states, the District of Columbia, Puerto Rico, Guam, the Virgin Islands.
For more information about the project and to view the grant application, a project video, and letters of support, visit www.BUILDingBloomington.com.