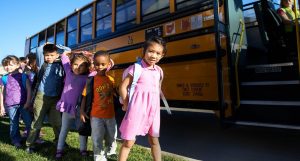 While their presence is outside the classroom, they play an important role in ensuring many students receive an education. As several districts have reported this school year, there also are in short supply.

A combination of factors — staggered schedules, strict background checks and part-time pay — could be part of the reason some districts across Central Illinois have been grappling with bus driver shortages.

The challenges have been especially noticeable in McLean County Unit 5. When classes resumed in late August, administrators within the Normal-based school district received an earful from angry parents who reported their children were picked up late — and, in extreme circumstances — not at all from their routes.

In the month since the school year got underway, Unit 5 Superintendent Mark Daniel said he has been trying to iron out a sustainable solution with First Student, the district’s contracted transportation provider.

Unit 5 outsourced its transportation services to First Student in fall 2012 “because of long-standing operational issues that became more acute during the 2011-12 school year,” Daniel said.

This fall, representatives within the Cincinnati-based company said they have struggled to staff enough drivers to serve Unit 5 students, despite trying to offer such perks as a sign-on bonus. In the first month of the new school year, there had been instances of First Student borrowing drivers from other districts to try meeting Unit 5’s needs.

In a statement, Jeff Vose, director of Illinois’ Association of Regional Superintendents of Schools, said finding the right candidates for bus driving positions is not an easy task, though it can be rewarding.

“You could have a morning route, possibly a noon route and a route around 3; and you can also have activities and field trips,” Vose said. “It’s kind of a tough shift. It’s not a straight eight-hour, or seven-and-a-half hour, shift.”

Districts elsewhere across the region have reportedly fared better than Unit 5 for a combination of reasons, some having to do with a central question: Should a district provide transportation services in-house or contract out for the service.

Like Unit 5, the Peoria Public Schools district had contracted with First Student for busing in prior years. At the start of this school year, the district began overseeing the service.

“It’s worked out well for us,” Superintendent Sharon Desmoulin-Kherat said of the in-house arrangement. “This is a great job for a lot of people, but we also know some of them take it to expand and build their resume and then move on to a full-time job.”

Desmoulin-Kherat said Peoria has tried staying ahead of staffing fluctuations by letting it be known the district is seeking qualified applicants on an ongoing basis. The district’s marketing efforts have included postings throughout the city.

“We’re always hiring,” Desmoulin-Kherat said. “We try to be very proactive about this, because it is important.”

Superintendent Marty Payne said Metamora Grade School has been fortunate to enjoy a level of stability in recent years.

“We have seven (regular) bus drivers, and we also have 5 to 6 people we call on from time-to-time as substitutes, and it’s worked out very well for us,” Payne said. “We’re in pretty great shape right now.”

While hiring and retaining bus drivers has frequently been cited as a challenge, there could be other factors added to the equation as well, particularly if a district, such as Unit 5, has boundaries within a growing populace.

“We haven’t had any major issues this school year, just a few minor ones, such as monitoring the number of kids on each bus,” Reilly said. “But things don’t change much for us from year-to-year. We’re locked in by our boundaries.”

While they have expressed an ongoing desire to work with Unit 5, representatives of First Student said they stand behind their record, pointing out they employ more than 57,000 bus drivers, monitors and technicians to their client school districts.
“We train our drivers to be highly skilled, not only in the technical aspects of operating a bus, but also the interpersonal aspects of engaging with students in a way that creates a positive experience,” Dennis Maple, president of First Student, said in a statement.

— Demand high for bus drivers in some Central Illinois districts —