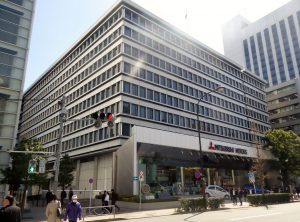 Efforts by leaders within the Bloomington-Normal Economic Development Council to lure new industries to the area have been accelerated since Mitsubishi North America announced one year ago that it was shuttering its Normal plant. (photo by Tokumeigakarinoaoshima)

Exactly one year ago, Japanese automaker Mitsubishi North America made the eye-popping announcement the company was shuttering its Normal plant and pulling up the stakes on all its operations within the U.S.

As Central Illinois workers were reeling from that announcement, another corporate decision emerged: construction machinery and equipment manufacturer Caterpillar was scaling back its operations, laying off 670 workers in East Peoria.

Across the region, chambers of commerce and economic development councils have been working behind the scenes to spur new corporate entries into the Heartland. But many officials claim those efforts have long been in the works and are not necessarily a direct response to the Mitsubishi and Caterpillar announcements.

Kim Uhlig, director of business attraction with the Greater Peoria Economic Development Council, said the region has a number of attributes — many geographic-related — that could be attractive to manufacturers and other industries.

Fifty percent of the U.S. population is a day’s drive away from Central Illinois, Uhlig points out, and the region is the 25th largest exporter in the country. Another attribute that has GPEDC staffers upbeat is the fact Peoria is one of two cities in the state that serve as a port of entry within on a body of water.

“These are all good tools to have at our disposal,” Uhlig said as she reaches out to manufacturers, agriculture companies, office operations and retailers.

Elsewhere in the region, leaders within the Bloomington-Normal Economic Development Council have been meeting with prospectors in a variety of industries to spur growth in the community.

Organizers assert BNEDC’s mission has not wavered since the Mitsubishi announcement, though some of the efforts have been accelerated. In April, for example, two local officials flew to Germany for the Hannover-Messe industry trade show.

Mike O’Grady, vice president of the BNEDC, said the visit was partially instigated by the Mitsubishi closure. But he emphasized there was a more global reason behind the participation, including a desire to reach out to company leaders who “might have some interest to manufacture in Bloomington, Normal or McLean County.”

While the loss of a business such as Mitsubishi clearly can put a dent in a local economy, that maneuver is only one part of the scenario. Central Illinois’ unemployment numbers have increased as thousands of workers have been left without jobs.

From a marketing perspective, Uhlig said she tries to put a positive spin on this reality as she meets with prospective developers — and, if overtures are successful, employers.

“What we have going for us is a skilled workforce that is available right now,” Uhlig said. “Not everyone can say that.”

Leaders of local labor unions have been on overdrive this past year as they try placing skilled workers in jobs.

But Mike Matejka, director of governmental affairs with the Greater Plains Laborers’ District Council, said his philosophy has remained much the same as it was before Mitsubishi and Caterpillar made their announcements.

“One thing we emphasize and push is the need to train and retrain,” Matejka said. “A lot of people don’t always know this.”

For would-be workers who are willing to adapt, adjust and demonstrate a willingness to learn with minimal direction, Matejka said the opportunities are boundless in this region because of apprenticeship programs.

“People who go into (apprenticeships) get a very quality, on-the-job education,” Matejka said, pointing out it is a marketable skill once a person transitions into the workforce. “To me, it’s one of the greatest untold stories.”