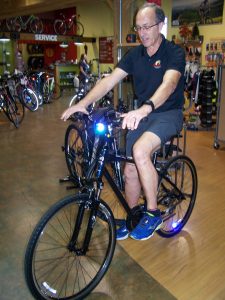 Joe Russell of Russell’s Cycling and Fitness demonstrates a “hybrid” Giant “Cypress” model bicycle. Loaded with features and comfort it is one of the most popular multi-surface bicycles among new and returning cyclists. (Photo by Tim Alexander/for Chronicle Media)

The bicycle and fitness industries have changed dramatically since Americans began embracing biking as a legitimate fitness option in the 1970s.

Rolling with the changes and public demand, bicycle manufacturers have been racing to outpace one another with the newest, sleekest designs, as municipalities large and small began instructing city planners to incorporate bicycle routes in neighborhoods and business districts. The off-road mountain biking industry also flourished, with trail routes popping up in public parks and on rural properties.

The Tazewell-Woodford-McLean counties region is blessed with myriad options for both casual and expert recreational and mountain bike enthusiasts.

Beginning in East Peoria and working to the west, regional recreational trails — many of which link to larger trail arteries — include the River Trail of Illinois, the Washington Recreational Trail and Bloomington-Normal’s Constitution Trail.

With the final push of an unusually steaming hot summer hopefully in our rearview mirror, many are feeling the itch to get those neglected bicycles out of the garage and start hitting some cool, crisp trails under autumn leaves. 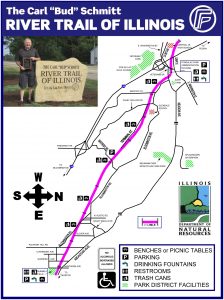 The bike trails in central Illinois are among the finest in the nation, according to Joe Russell, who has owned and operated Russell’s Cycling and Fitness in Washington since 1977.

“In terms of total mileage, we are still limited, but the quality of trails and surface is world-class. Riding from Washington all the way through Peoria on paved surfaces is world-class. Our trail designs are world-class,” said Russell. “There are also no better mountain biking trails to be found in all of Illinois than right here in central Illinois.”

The region is blessed with a number of outstanding bicycle clubs comprised of riders with varying skill-sets and goals, connecting like-minded people who enjoy exercising in groups and socializing.

“The clubs and the dedication of these individuals is the ‘special sauce’ for central Illinois. We have the Illinois Valley Wheelm’n, the Peoria Area Mountain Bikers Association (PAMBA) and the McLean County Wheelers. These groups have literally blazed the trail for us, providing the advocacy and the lifeblood for the creation of our trails,” Russell said.

The wheels are still turning on trail development in central Illinois. Workers will soon be closing the loop on Washington’s trail by paving a bike lane from rural Nofsinger Road into town. A grant has also been approved to connect trails from Eagle to Gilman streets within the city, finally completing the approximately eight-mile system envisioned in the 1990s.

In Bloomington-Normal, extensions to Constitution Trail branching north and south of the twin cities, known as the Route 66 Trail, will eventually allow riders to travel from Atlanta, Ill. through the cities and north to Chenoa alongside the old Mother Road, said Chris Koos, mayor of Normal and owner of Vitesse Cycle Shop.

“In Normal and Bloomington combined we currently have 53 miles of trails throughout the community that are quite popular with recreational riders. 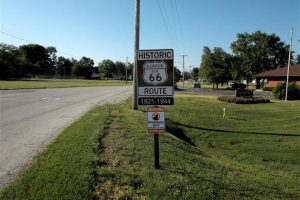 The Chenoa trail is built directly over the historic Route 66 and this stretch is on the National Historic Register. The route ends north of U.S. Route 24 and County Road 3000 N. (Photo courtesy of traillink.com)

Enthusiast riders who travel long distances use it to get outside the town without using city streets, but the primary user is the recreational user and families,” said Koos. “It is a goal for each community to be able to connect into a bigger trail system, but it becomes a matter of land rights and funding. We estimate it costs around $50 per linear foot to put together a trail system.”

The demographics of a typical biking enthusiast have shifted along with the industry, according to Russell, who began his business in his father’s garage while still in high school. “The biggest segment is still the 50-and-up crowd. The biggest-growing segment, though, is the 30-to-50 crowd, both male and female.

“They are wakening to the fact that owning a bicycle is like having a membership to a health club,” he said. “You have your muscle-building, cardio, the unlocking of a tight body. If you commit to a 20-20 plan — 20 minutes of biking 20 times a month, you are going to move the needle as far as your health numbers are concerned.” 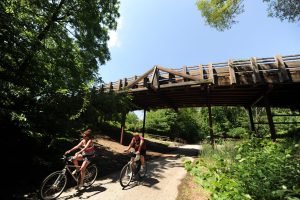 Constitution Trail is a 45-plus mile hard surfaced trail running through Bloomington-Normal that has been developed for walking, hiking, jogging and biking. It has been open 28 years, with improvements and expansions over the years. (Photo courtesy of Town of Normal)

Selecting the proper bicycle is the most important decision a new or returning biker can make. Technology has advanced at warp speed compared to the days when Schwinn and Huffy ten-speeds competed for showroom space in department stores.

Terra-Trikes are four-wheeled, low-slung machines beneficial to riders seeking extra stability and balance. E-bikes, or electric-assist hybrids that can be run for periods of time on a small electric motor, are increasingly popular due to their lightweight aluminum design and comfort. “There are some entry-level mountain bikes that are pretty popular, but many people are buying the fitness hybrid or the comfort hybrid,” said Koos. “They are purchasing them for fitness or just to be able to ride with the family. We are also selling a bike called the Electra ‘Townie,’ which is very popular with the older generation. It’s got a very relaxed spring geometry and you can put your feet on the ground when you want to stop.”

E-bikes popular at Vitesse Cycle Shop and Russell’s Cycling include models made by Trek and Giant. “These are very popular with commuters, the older demographic and couples who might have different experience levels. The less experienced biker can keep up with the more advanced biker with an e-assist,” said Koos. 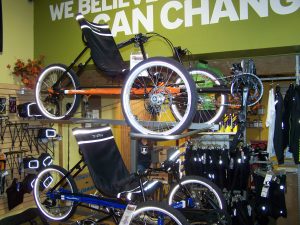 The “Terra-Trike” is a comfortable, but powerful low-profile bike popular with older cyclists. A tandem model is also available. (Photo by Tim Alexander/for Chronicle Media)

“The Giant e-bikes are just solid bikes that you and I can use on pavement or gravel. When the pavement ends, you just keep riding,” said Russell, who is currently offering 2019 Giant “Cypress” and “Roam II” models ranging from $600 to $900 at his store.

Before hitting the trails this fall, making sure you have the proper equipment is paramount to your safety and enjoyment.

“In addition to the bike, you are going to need a helmet, a mirror, two flashing lights for the front and rear, a small bag and a way to carry a water bottle,” Russell said, adding that it doesn’t hurt to make extra investments in the name of safety.

“Garmin is making a radar that emits a signal when a car appears as far behind you as 150 yards. This is game-changing technology,” he said.