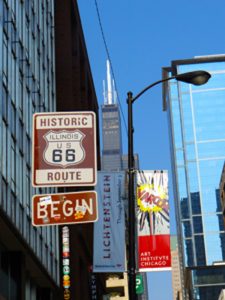 The beginning point for Route 66 at East Adams Street and Jackson in Chicago. (Photo courtesy of Illinoisroute 66.org.)

The commission will develop plans for celebrating the famous road’s 100th anniversary in 2026. Also known as The Mother Road, Route 66 put Illinois on the national numbered highway network map in the late 1920s as the state became the first to pave the entirety of its share.

The route took travelers between Illinois and California at a time when traveling by car was just beginning to overtake rail travel. Route 66 became renowned for its over-the-top roadside attractions and plethora of conspicuously neon-lit motels — resulting in the “Get your kicks on Route 66” song lyrics of 1946.

“Illinois has a distinct place of honor in this famous road’s history. Not only is Chicago its starting point, our people were the first to pave it from end to end as it wound southwest toward St. Louis and on to the Missouri border,” Rauner said July 31 after signing House Bill 66. “This made it easier for motorists to travel and sparked a golden era of fun family road trips, with plenty of places to stop and enjoy along the way.

“Although it appeared destined to fade from history for a time after the new interstate highway system was built, today the route is once again a popular and enduring tourist attraction in our state,” he continued. “Illinois Historic Route 66 is a nationally designated scenic byway. This commission will put together events and programs worthy of our state’s place in Route 66 history, and I look forward to the celebration in 2026.” 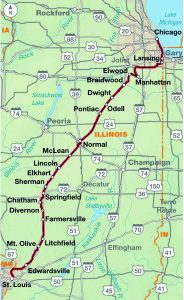 Route 66 runs from Chicago to Los Angeles, winding through Illinois.

Centennial events could include programs highlighting the growth of local communities as construction proceeded along the route, the cultural impact of Route 66 in the U.S. and globally, the portrayal of Route 66 in music, artwork and folklore, and guidance on how to maintain its mystique and appeal for future generations.

“Historic Route 66 is not only iconic, it plays an important role in our state and national history and culture,” said Althoff, chief Senate sponsor of the bill. “One hundred years later, the commission will develop a plan to highlight and celebrate Route 66, with events that will be enjoyed by both residents and visitors.”

“Route 66 begins right here in Illinois, and I am proud that our state will be leading the way to celebrate the centennial of this world-famous byway,” said Butler, the chief House sponsor of HB 66 and a member of the Illinois House Committee on Tourism, Hospitality and Craft Industry. “The Mother Road’s 100th birthday celebration will be an international event, and this commission will get us ready to welcome visitors from around the world who want to experience the magic of Route 66.” 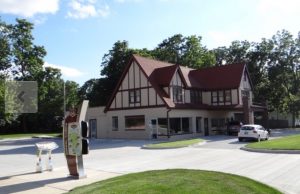 Sprague’s Station opened in 1931 to serve travelers on Route 66.  It housed a cafe, gas station, and garage, with upstairs apartments for the owner and station attendant.  Now owned by the Town of Normal, it is on the National Register of Historic Places. (Photo courtesy of Illinoisroute 66.org.)

The highway was decommissioned in the mid-1980s, and across many states only a ghost of it remains. In 1989, Illinois was among the first states to create a Route 66 Association, and in the late 1990s, it was made a State Heritage Tourism Project. In 2005, Illinois Historic Route 66 gained National Scenic Byway status, the first state attaining that designation.

“Today, the Illinois Route 66 Scenic Byway is the envy of the other seven states,” Butler said. “It is a true leader in activities and preservation.”

“It is an honor to have the governor sign this bill in Plainfield, which is the only spot in the country where Historic Route 66 and Historic Route 30 became one road,” Batinick said.

The Illinois Route 66 Centennial Commission will consist of 20 members who reflect the interests, history and importance of the communities along Historic Route 66 in Illinois.