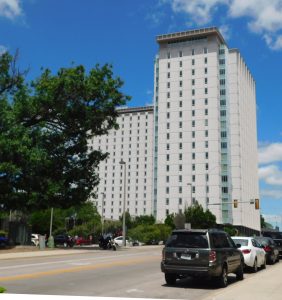 One of the existing dormitory buildings on the Illinois State University campus in Normal. ISU is looking to add a 1,200-bed on-campus building to meet increased housing demands. (Chronicle Media photo)

Illinois State University’s presence in Normal could increase in the coming years if a public-private partnership comes to fruition and a 1,200-bed dormitory building is constructed.

Last month, ISU officials issued a request for proposals, or RFP, to the development community for the proposed dorm. More details came to light early this month during a conference call geared toward bidders interested in taking part in the project.

At this point, a number of the finer points of the would-be project have yet to come to light.

ISU officials, for example, have not discussed where the proposed dorm building would be located. Also uncertain at this point is what such a facility would cost, and how much ISU would be willing to chip in to fund the project.

A 59-page RFP document, however, does divulge the rationale behind the efforts to increase housing on or near campus.

“The housing complex will support ISU’s strategic aspirations to not only grow, but diversity the on-campus housing stock,” a statement within the document reads.

It continues, “Accommodating unmet, non-apartment demand, along with a de-densification of residence halls creates a need for additional on-campus beds to accommodate the university’s two-year on-campus live-on requirement.”

In the first half of the 2018-19 school year, ISU officials have frequently been touting the need for more space as Illinois’ oldest public university experiences an enrollment surge.

All told this school year, 20,635 students, undergraduate and graduate, are attending classes on the ISU campus.

In his state of the university address this past fall, ISU President Larry Dietz addressed this school year’s enrollment.

The number of students taking classes this school year is the second largest in the past 25 years, Dietz said. Next year, ISU is anticipating another enrollment spike, he said, which could reach 37 percent, based on preliminary data. 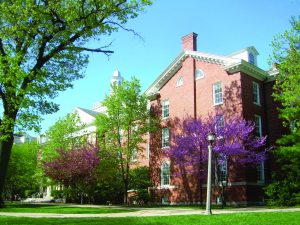 Fell Hall on the campus of Illinois State University in Normal. The building, which houses the school of communications, is located on the west end of the quad between DeGarmo and McCormick halls. (Photo courtesy of ISU)

“We are on the move, onward and upward, as an institution,” Dietz said in the address. “We’ve been bucking the trend of declining enrollment. Our enrollment is strong.”

Dietz in the address also pointed to the unique challenge the growing enrollment poses on the campus, logistically.

“Our campus is at or near capacity,” he said.

Details of the proposed dorm facility are expected to come into sharper focus as 2019 progresses. ISU officials have put in place a number of timelines, as outlined in the RFP document, which was unveiled Dec. 21.

Tentatively, ISU officials have indicated a desire to have the new dorm facility operational in time for the 2021-22 school year.

This is not the first-time ISU has called on private developers to bring housing accommodations to the campus.