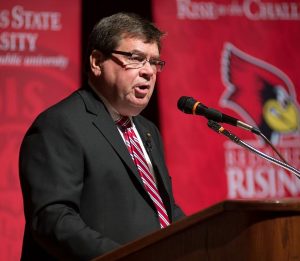 Board of Trustees Chair Julie Annette Jones said the search process for the university’s 20th president will begin immediately.

“President Dietz’s remarkable tenure has spanned a half-century of rapid change, success, and challenge for higher education, and his vision and steadfast commitment have been the bedrock of his service,” said Jones.

“I know the Board of Trustees and the entire University community will join me in offering Dr. Dietz our deepest gratitude and congratulating him on more than five decades of stellar service to the field of higher education. His legacy will be one of enduring quality, leading with authenticity, and serving as a model of civility. We also thank and congratulate his spouse and University First Lady Marlene Dietz for her numerous contributions to the success of Illinois State and the greater community. Her phenomenal Redbird loyalty and far-reaching community support shows that Marlene and Larry make a unique and exceptional team,” Jones said.

Dietz arrived at Illinois State in June 2011 as vice president for student affairs and tenured associate professor in the Department of Educational Administration and Foundations. He was appointed Illinois State’s 19th president in March 2014.

During his tenure, the university has enjoyed thriving enrollment and is continually ranked among the top universities in the United States for high graduation and retention rates, and low student loan default rates.

Reinforcing those values in an environment of shared governance, he secured the addition of a degree program in cybersecurity while paving the way for a new engineering program.

His initiatives include opening the Center for Civic Engagement and Service Learning, renovating the Bone Student Center, creating a more international campus community, and shepherding plans for the new Multicultural Center.

Fundraising under Dietz’s leadership reached record levels with gifts and commitments totaling more than $180 million through Redbirds Rising: The Campaign for Illinois State University. Of the record 56,143 donors who participated in the University’s second comprehensive campaign, 27,254 were first-time contributors and 30,554 were alumni. More than 1,500 corporate partners invested over $27.8 million in Illinois State.

Redbirds Rising included 27 pacesetting gifts of $1 million or more, while 26 percent of the campaign’s total came from gifts of less than $25,000. Two eight-figure contributions were part of that campaign.

The landmark gift from ISU graduate Wonsook Kim and her spouse, Thomas Clement, resulted in the naming of the Wonsook Kim College of Fine Arts and the Wonsook Kim School of Art.  The historic eight-figure commitment from alumni Jim and Carole Mounier supports Redbird Athletics.

Since March, Dietz has led the University as it grapples with the COVID-19 pandemic, the world’s worst health event of our lifetimes.  Dietz says working to ensure the health, safety, and well-being of the University community will remain Illinois State’s top priority during his final months on campus.

Dietz also managed the university through a financial crisis, the 793-day Illinois budget impasse from July 1, 2015, to August 31, 2017. Dietz often used the phrase “strong and stable” to define Illinois State’s resiliency during those fiscally troubling years.

“I believe my final seven months as president may indeed be the busiest and most challenging of my career as I continue to work with our faculty and staff colleagues to keep the University community as safe and healthy as possible while still delivering a high-quality ISU experience,” Dietz said. “In addition, the COVID-19 pandemic will certainly trigger severe budget challenges which must be addressed in the coming months.

“However, as my career in higher education draws to its conclusion, an emotion that fills my heart today is one of gratitude. It has been an honor and a privilege to serve with so many terrific students, faculty, staff members, alumni, retirees, and friends. I am thankful to our Board of Trustees for the confidence they placed in me six years ago, and for the support and guidance they have offered ever since.”