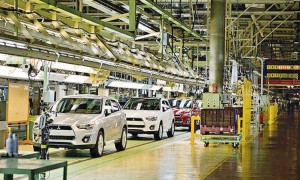 Production at the Mitsubishi plant in Normal officially came to an end on Nov. 30 after 30 years of operations. (Photo AutoNews.com)

With the year winding to a close, McLean County officials recently recognized a milestone for the region — more than a year has passed since a person was murdered. The statistical trend is notable in a year where mass shootings have grabbed the nation’s headlines and a number of lone homicides have garnered similar attention. Other portions of Central Illinois have not fared as well in 2015. Fifteen murders have been reported thus far in Peoria, and eight have occurred in Springfield.

Bloomington resident Danielle Fischer, 25, pleaded guilty on Wednesday, Dec. 2, to charges she did not obtain medical care for her son, 3-year-old Robbie Cramer. who died from injuries sustained from physical abuse. Fischer’s son was in the custody of her former boyfriend, Nicholas Compton, in March 2013. Compton, who is accused of repeatedly beating the boy and causing numerous internal injuries, was charged previously for murder. Fischer is scheduled for sentencing in February.

In keeping with state statutes, the city of Bloomington is currently soliciting feedback on the proposed redevelopment of a 201-acre redevelopment site known as the Empire Street corridor. The area is bound by Colton Avenue to the west; Veterans Parkway and Orchard Road to the east; Rowe and Riley drives and Robinhood Lane to the north; and E. Empire Street and Eastland Mall West Drive to the south. The city is asking anyone wishing to register as an interested party to solicit feedback on the redevelopment site. Interested parties, as defined by state statutes, can include Bloomington-based businesses, business organizations, civic groups, nonprofit organizations and community groups. For information, visit www.cityblm.org or call Austin Grammer, economic development coordinator, at (309) 434-2611.

Citing a series of challenges, many of them weather-related, Bloomington officials announced recently public works crews are continuing leaf pick-up efforts into the foreseeable future. “This fall has been a particularly hard year for leaf collection,” Public Works Director Jim Karch said in a statement. “The leaves all seem to have fallen at once, and that combined with weather conditions have really stretched our resources, leaving us three to four weeks behind where we’d like to be at this time of year.” Residents can rake leaves curbside or place them in open bags or containers that are 33 gallons or less. For information, call the public works office at (309) 434-2225 or email publicworks@cityblm.org.

Westbound Locust Street, also known as Route 9, will be closed to all traffic from Oak Street to Mason Street to accommodate sewer-related repairs. Traffic within the impacted area is being diverted to Market and Lee streets. The closure took effect Thursday, Dec. 3. Bloomington officials have not given a timetable for the reopening of Locust Street.

Ryan Otto, who has served as the city of Bloomington’s project engineer, has been promoted to the position of assistant city engineer. Otto is a 10-year veteran of the city. He holds a bachelor’s degree in agricultural engineering from the University of Illinois and holds licensure with the Illinois Society of Professional Engineers. In a statement, Public Works Director Jim Karch said Otto was ideally suited for the position. “Mr. Otto has demonstrated and grown his strong ability in engineering through a decade’s worth of work,” Karch said. “I have every confidence in his ability in his new role. He is committed to the excellent stewardship of public infrastructure.” Otto succeeds Bob Yehl, who was named the city’s water director earlier this year.

The final vehicle rolled off Mitsubishi’s assembly line in Normal on Monday, Nov. 30, marking the end of an era that has spanned more than three decades. In July, Mitsubishi, one of the largest employers in McLean County, announced it was shutting down operations in Normal as part of a series of cost-cutting efforts. Mitsubishi’s employment count has hovered around 900 union workers, and a small percentage will continue working for the company into early 2016 to complete the wind-down process. Several organizations, including the McLean County Chamber of Commerce, are stepping up efforts to assist displaced workers. A job fair geared specifically toward the Mitsubishi workers is planned for Wednesday, Dec. 11. A task force continues to seek future options for the Mitsubishi site.

Normal Mayor Chris Koos is one of four top-elected municipal leaders across the state who have pledged support of bringing Syrian refugees into the U.S. Koos signed an open letter expressing the sentiments. Nationwide, 62 mayors have gone on record with such support with the caveat the refugees undergo a screening process. The mayors’ actions run in contrast to a recent bill in Washington, D.C. The house proposed and passed a bill calling for suspension of the Syrian refugee program. President Barack Obama has pledged to veto the bill if it passes through the Senate and lands on his desk.